The Heroic Boldness of Martin Luther 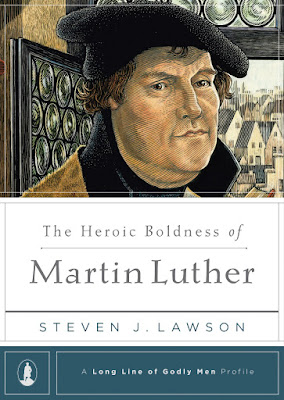 This book is by no means a complete biography of Martin Luther. It does not deal with any of the flaws that are sometimes mentioned with regard to his life. What it does do (very well) is show how God used Luther to redirect His people back to His word.

And how was Luther equipped, and how did he equip others, to do that? First of all, he had, in the words of the title of Chapter 2, "A Deep Conviction about the Word" - its verbal inspiration, its divine inerrancy, its supreme authority, its intrinsic clarity, and its complete sufficiency.

A deep conviction about God's word is not effective unless one also knows it deeply, and Luther did. Chapter 3 portrays the second key characteristic of Luther's approach to the preaching of God's word - his "Relentless Drive in the Study." First of all, he humbly followed wherever God was leading him through His word. Second, he stressed going back to the Bible rather than any commentaries - reading through the Bible himself twice a year. Third, Luther departed from much earlier interpretation of God's word by sticking to the clear meaning of the text rather than spiritualizing it. Finally, he emphasized the reading of the text in the original languages, and the need for the work of the Spirit to work with God's word.

Next, Lawson shows the structure and content of  Luther's sermons: concise introduction, biblical exposition, a stress on God's law, the exaltation of Christ and His work on the cross, personal application, and the invitation of the gospel. This is similar to the structure of the Heidelberg Catechism - sin, salvation, service. Luther's sermons were also delivered powerfully, with an indomitable spirit, fervent intensity, accessible speech, and colorful expressions.

Finally, Luther preached with full disclosure of the truth, confident assertions of Scriptural wisdom, determination in the face of opposition, undaunted courage, and a daring defense of Biblical teaching.

Lawson concludes with an exhortation to continue the Reformation by emulating his high view of the Scriptures, a high view of God, and a high view of the pulpit. If you believe that Lawson's view of Luther gives us a good way to see the value of the kind of preaching that Luther preached and promoted, you can get his book at Amazon.com here and Amazon.ca here.