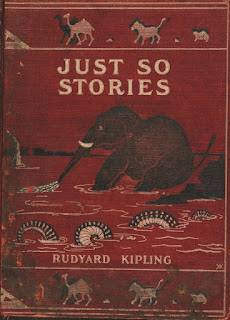 A great book for fathers to read to their daughters is Just So Stories, because Rudyard Kipling actually wrote it in memory of his oldest daughter, who died of illness. In the book, he calls her his "Best Beloved," which is a good thing for fathers to call their favorite daughters (all of them, of course) as they read, for instance, how a father and his daughter invented the alphabet.

There are some details that merit caution. Some stories need pre-reading – since they feature “gods” and djinns and a magic-wielding King Solomon, or a somewhat stereotyped Ethiopian character – to see if parents want to read them to their daughters (or sons).

However, the moral lessons taught are always sound. For instance, when there are people in the stories, the tales assume that man is meant to "have dominion" over creation, as God commands in the creation mandate of Genesis 1, and as David wonders at in Psalm 8. (SPOILER ALERT!) As an example, the Camel's refusal to work for the man is what eventually gets him his "humph." The Whale's tiny throat results from his swallowing a mariner with "infinite-resource-and-sagacity and the raft and the jack-knife and his suspenders, which you must not forget."

That last phrase – "infinite-resource-and-sagacity" – is the sort of vocabulary that Kipling loves to use in the Just So Stories. Kipling's word choice may challenge both parent and child as you read it aloud (look it up if you need to!), but it the quotation above is also a catchy refrain. Kipling's catchy catchphrases will stay in your mutual vocabulary as the best kind of private joke that readers of a classic tale can share.

The version shown here also has Kipling's original illustrations, which have the charm of showing how a father with an endlessly inventive mind, and drawing skills that almost (but not quite!) match his imagination, explains the 'good part' of the story to his young daughter, including the invention of the letters of the alphabet, as seen through her child's view of the world.

In conclusion, this is a book I have read aloud to children in my family, both at six years old and at eight - but like any intelligent children's classic, you could also read it to much older children who will appreciate its charm and humor. Highly recommended.

Many version can be had, including this one from Amazon.com, and this from Amazon.ca.
Posted by Jeff Dykstra at 12:01 AM