A Spiritual Roadmap for Modern Pilgrims 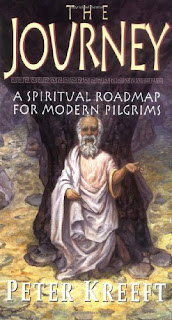 This is an allegorical journey, reminiscent of John Bunyan's Pilgrim's Progress. But in this case, the pilgrim - the author Peter Kreeft - has Socrates as his guide. And instead of facing trials and temptations on the road, he runs into one Greek philosopher after another, every time there is a fork in the road. Each one of them offers up their own particular worldview for consideration and Kreeft then has the choice of either staying with them, and subscribing to their philosophy, or rejecting it, and continuing on his journey in search of Truth.

Though these philosophies are ancient, they are also current. Take as example the first philosopher Kreeft and Socrates meet: Epicurus presents the "Eat, drink and be merry." He tells Kreeft that the Truth isn't even worth seeking after - not when there is so much partying to do! Today we might call this the Hugh Hefner philosophy - why think about things such as Truth and the purpose of life, when there is yet another woman to bed, more money to be made and spent, and more parties to attend. And indeed, when the pilgrim rejects this worldview, he notices that Epicurus bears a strong resemblance to Hefner.

As he continues he meets more ancient Greeks, each with their own challenge to present, and each with their own modern day counterpart. This is what makes the book a valuable tool. Just as Socrates is a guide to the pilgrim Kreeft as he is confronted with ten different errant worldviews, so too this book can serve as a guide to anyone bumping up against these worldviews today.  Some of the philosophers he meets include:
It is a very well-written, fun read, but because the book is deliberately philosophical this slim volume could seem a bit intimidating to anyone not already familiar with ancient Greek philosophy. But you don't need to be able to tell Socrates from Plato to enjoy this book. All you need is an interest in learning to discern how these philosophies are still being practiced and promoted today.

One note of caution: the author is Catholic, and in this book that comes out in an Armininan flavoring to some passages. But Kreeft is also a great thinker, and when he targets secular errors, as he does in this book, there are few writers his equal. He has a whole series of books that feature Socrates and his questioning method, including The Unaborted Socrates: A Dramatic Debate on the Issues Surrounding Abortion

and the Best Things in Life

, both of which I would also recommend. But Kreeft is also a dedicated apologist for the Roman Catholic church and has written innumerable books on that subject too, so I would not recommend all his books with equal enthusiasm and would warn off an undiscerning reader from most of them, these three excepted.

That said, this particular title would be perfect for anyone in university, or heading there, as a great tool to help them see through and answer the secular worldviews they'll run into on campus.
Posted by Jon Dykstra at 6:00 AM

Email ThisBlogThis!Share to TwitterShare to FacebookShare to Pinterest
Labels: allegory, books you can read in an evening or two, Christian fiction, college, philosophy, Pilgrim's Progress