When Faith is Forbidden: 40 days on the frontlines with persecuted Christians 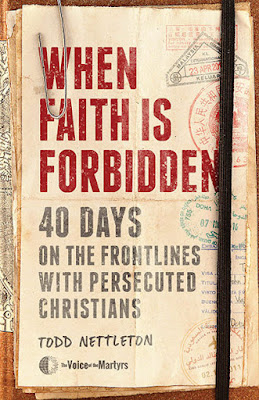 Though it'd be best absorbed in the month-and-a-half that the title prescribes, I read this in just two days – it was simply too wonderful to put down.

Each of the 40 chapters is a story of a Christian who shared God's good news with those around them, come what may. They shared it because they knew that the relatives trying to silence them, the mob trying to intimidate them, or even the policemen coming to arrest them, all needed what God had already given to them. So this is a story of Christians far braver than we, but more importantly, it is the story of the good God who sustained them.

In a few instances He did so by way of big miracles: Muslims with no access to the Bible are reached in their dreams, a man shot twice in the chest survives because the bullets did no major damage, police tossing a house find a lost sewing needle but miss the three large boxes of Bibles in the middle of the room. In others, the miracles were maybe less spectacular, but exactly what was needed: a man who used to beat Christians is so won over he is now willing to suffer those beatings rather than stay quiet about his Lord, a woman whose husband was murdered is able to forgive the murderers, a drug addict who turns to God is instantly freed from his addiction.

This is an incredible book, and much needed here in the West where we are terrified of speaking God's good news because of what it might cost us in status, or promotions, or friendships. These persecuted Christians want us to understand that for God's people, persecution is to be expected (John 15:18-21) but it need not be feared because our God is greater than the world and what we might have to suffer is nothing compared to what we have gained in Him.

This could be the sort of book you buy by the boxload, so you can give it to everyone you know.