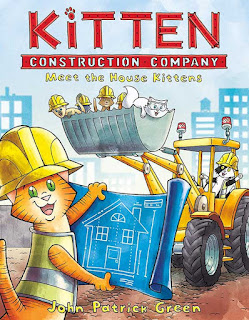 The author of Hippopotamister is back with another charming treat for early readers. The story begins with "the city of Mewburg preparing for a big project..." They are building a new mansion for the mayor, and to get it started the city planner has to find the right architect. He has a few candidates to chose from, and the first up has a brilliant design. But there is a problem: the architect is a cute kitten!

"Sorry," he tells little Marmalade, "I regret that you are just too adorable to be taken seriously."

When Marmalade goes off to drown his sorrows in a saucer of warm milk, he meets another kitten dealing with the very same problem: no one is giving him a chance, because he's just so cute. The two decide that maybe they can team up. When they get hired on to help at a big construction project, they think that maybe their luck has turned. But they soon realize that they aren't being given actual work - just busy-work projects.

That's when they decided that if no one else will take them seriously, they'll go out on their own. And that's how the Kitten Construction Company is born!

The kittens get to show their talents when the official mayor's mansion falls to pieces, and they can then take the media and their mayor to see their own, gorgeous, and fully upright, version. That's when everyone has to acknowledge that cute isn't the opposite of capable.

While most of the book's intended audience won't realize it, the author is kindly and gently poking fun at discrimination. He's making the lesson gentle, by making the source of discrimination "cuteness" rather than skin color or gender but what comes through is that treating people based on how they look rather than what they can do is ridiculous. He's also not hammering kids over the head with the lesson, feeling free to divert from the lesson to bring in some funny cat jokes.

The sequel deals with a similar anti-discrimination theme when the kittens get the call to design and build a bridge. As everyone knows, cats don't like water, so they'll need some help with this job. And standing ready are...the Demo Doggos.

Dogs? Marmalade isn't sure. Will that be, as the title asks, A Bridge Too Fur? 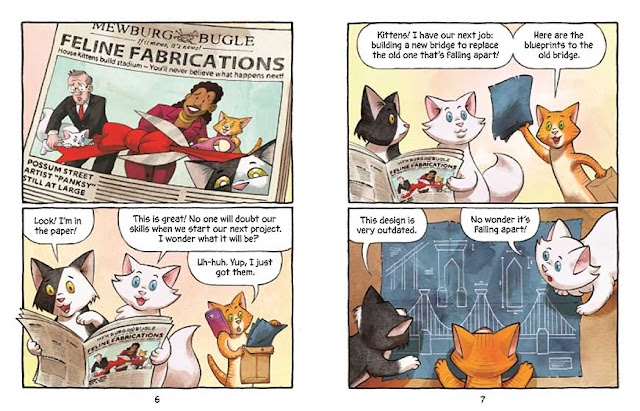