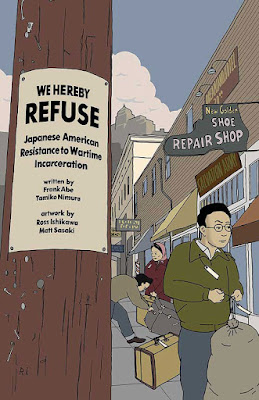 After the Japanese bombing of Pearl Harbor, tens of thousands of Americans of Japanese descent were rounded up and placed in detention camps around the US. They lost their jobs, their businesses, and even their homes, not because of any crimes committed, but simply for their ethnic roots. This same indignity wasn't forced on German or Italian Americans, even though Germany and Italy were at war with the US. Just Japanese Americans. And despite the obvious discrimination against them, the vast majority went without protest, believing that quiet acceptance was a way of showing their loyalty and patriotism.

What the graphic novel We Hereby Refuse recounts are the stories of Japanese Americans who did protest, in very different ways.

One protester was an otherwise quiet young lady. Mitsuye Endo was a 21-year-old typist who lost her job when she was ordered to report to the internment camp. A lawyer asked her to sue the government for causing her job loss. He recruited her because she seemed the ideal candidate at a time when everyone was scared of Japan: she did not speak Japanese and didn't follow a Japanese religion like Buddhism or Shinto. She even had a brother serving in the US army. And she had also done everything the government had ordered her to. She was quiet and still she stood up, her case eventually going all the way to the Supreme Court, where she won.

Another story shared is that of Jim Akutso, who repeatedly tried to sign up for the Army but was refused because of flat feet. After he was imprisoned in a detention camp he was found out he'd been drafted, but now he refused. His reasoning was that if his country wasn't willing to let him live freely, then he wasn't going to fight to protest the freedoms he didn't even have. His refusal was condemned by many other Japanese Americans, who thought his actions cast them all in a bad light. He was convicted of draft-dodging, and moved from the camp to a regular prison, and given a sentence that extend past the end of the war.

I'm not familiar with the history here, so I can't really assess how fair the presentation is. I suspect that certain historical figures, particularly the Japanese Americans who acted as go-betweens for the prisoners and the US government, might dispute the way they are portrayed. However, the broad overview seems to be reliably done.

I don't generally recommend books that take God's name in vain, but I'm making an exception here because this is not simply entertainment but educational, sharing an event that needs to be more widely known. For Christian parents or librarians who might like to strike a line through it, the abuse occurs just once, on page 128. Another caution concerns age-appropriateness. Near the end of the book, an older woman kills herself in despair. She's shown beginning to wrap a lamp cord around her neck, and while it doesn't get more graphic than that, the act itself isn't something young children need to read about.

I'll also note that I've seen the authors making appearances on podcasts sharing their personal pronouns, so I rather suspect their politics and worldview do not line up with my own. But that difference wasn't evident in the book itself.

This was compelling, but I didn't find it an easy read. Some of that was due to my unfamiliarity with Japanese names, which had me confusing different characters so that I'd have to flip back and forth to keep things straight. But I was happy to keep flipping because it's a story worth knowing. We Hereby Refuse is a reminder that the government is powerful, and with power comes the need to use that power with great restraint. What happens when it doesn't act with restraint? We get victims by the thousands and tens of thousands, as happened here. Another lesson? The need for brave individuals to challenge government abuses, in the hopes of reducing the number of victims.

This would be a great purchase for Christian schools, and for parents to buy and read with their children. The serious subject matter means this is probably for 14 and up.

The 4-minute video below, offering some local news coverage, gives a good overview of the book.