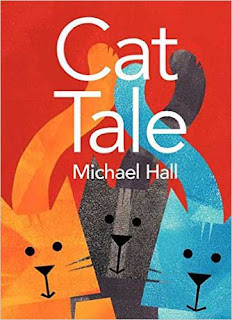 This is just such a clever and fun book to read out loud. The front cover gives a good clue as to what this is going to be about - three cats, their tails swaying, but the title refers to another sort of tale. Yes, this is all about homonyms - words that sounds alike, but have different meanings.

Every page features a homonym or two. So, for example, at one point the cats have used a box to hide from bees, and then on the next page the cats are doing "...their best to box some fleas."

On and on it goes, with flea then becoming flee:


They flee a steer.

Of course, sometimes homonyms have the same spelling, so on the next page it is still steer, but a different sort:


They steer a plane.

It took my girls, all seven and under, the first reading to figure out what was going on - it was all a bit mysterious to them as to what the joke was. But that was, in part, because I was still figuring it out, so I wasn't reading it with the proper emphasis - I should have been giving a little extra oomph to each homonym as they appeared.

But that delay wasn't frustrating for them; it is a fun, colorful book with attractive pictures, so that was enough to keep them intrigued during the first go-through. And on second reading, when I explained the joke to my youngest (the seven-year-old was starting to catch on) they just loved it. This is the perfect sort of joke for this age group - simple enough for them to get it, but clever enough for them to spend a lot of fun time exploring how it works from page to page.

So great fun for all my girls from three to seven. And that's probably the proper age range for it - any younger and they won't understand, and any older and the picture style would make this seem too childish (even if 40-year-old me still enjoyed the humor). This would be a fun book for the home, but make an absolutely fantastic resource for a Grade One classroom.

You can pick it up at Amazon.com here, and Amazon.ca here (and if you do use these links to make a purchase, Amazon will send us a small tip, at no cost to you).