Akimbo and the Lions 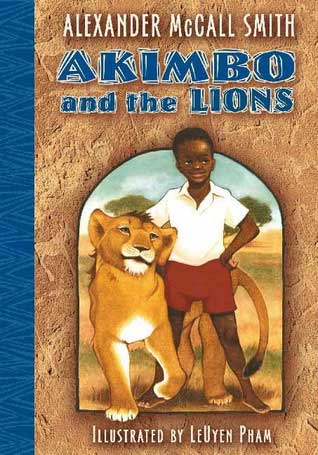 Alexander McCall Smith is best known as the author of the The No. 1 Ladies' Detective Agency but it turns out he's written a number of children's books as well. And they are good. Really good!

Akimbo is a boy who has access to all the coolest animals in Africa – his dad is chief ranger in charge of a wild game reserve, which means that from one book to the next Akimbo is having adventures with snakes and baboons and elephants and crocodiles, oh my!

In Akimbo and the Lions he accompanies his father to trap a lion harassing a small village. But things don't go as planned – instead they trap a cub and scare the momma away. That means someone needs to take care of this wee little lion, and Akimbo convinces his dad that he is just the boy for the job!

McCall does a wonderful job of balancing the tension in the book. There were moments where my 5 and 7-year-old were covering their mouths (and sometimes their eyes) but these moments didn't last too long.

This is just a good old fashioned adventure, perfect for their age group. It is short – a book that can be read in an hour – exciting, sometimes sweet, with gentle humor along the way too. And in this first story, there is absolutely nothing to object to – Akimbo doesn't talk back to his parents, or teacher. No sex, no language, no weird philosophies.

The only downside would be God's absence. In an adventure where God's creation has such a big role, it would be only natural to give God his credit for these wonderful creatures. But it seems that Akimbo and his parents are not Christians. And if I was going to add one other nitpick I'll also say this is not the sort of children's book that works equally well as an adult book (this is no Narnia, for example). The story is too simple and predictable for older folk. I only mention that because, since this is by a well known, and well-loved adult-fiction author, that might raise some expectations. But while these are very good kid's books, they are kid's books.

There are five in all, in this order:
The others

In addition to Akimbo and the Lions we've now read the other four in the series.

Akimbo and the Crocodile Man was a bit scarier as there is an actual crocodile attack. It all turns out fine in the end, but that extra bit of tension means I was glad we did read things in order, starting with Lions before Crocodile Man – that order meant even in Crocodile Man's scariest bit, my girls understood that this sort of book was going to have a happy ending.

Akimbo and the Elephants had Akimbo going behind his dad's back to stop ivory (which comes from elephant tusks) poachers. He has good intentions, but lies a number of times, and even steals some ivory to serve as bait for the poachers. We had to explain to the girls that Akimbo was doing something downright dumb here - that he should be talking his plan over with his dad. So while we enjoyed reading it together, I would have some reservations about my children reading this by themselves.

In Akimbo and the Snakes we come along as Akimbo visits his Uncle Pete's snake farm for a month and learns what it means to "milk" snakes. My nine-year-old enjoyed learning more about snakes but said this was definitely a day time and not bedtime book. The only objectionable bit would be in the notes after the story where it briefly mentions that snakes are thought to have evolved from lizards.

In Akimbo and the Baboons a "baboon lady" comes for a visit. This is a visiting scientist who has come to study that baboons, and Akimbo and his cousin Kosi get jobs as her assistants. The author believes in evolution, and while that only comes out clearly in a section in the back – "Brilliant baboon facts" where McCall notes baboons are not in the same genetic family as human beings – the scientist, Jen, notes a few times in the story, how the baboons are "a lot like us" or "just like us." True, in some ways, but when we read between the lines here, we can see this is about being similar in an evolutionary sense. I'm making much of this and will note my nine and under kids didn't even notice the evolutinoary angle.

So if I was getting these for a school library, I would get the first two – two very enthusiastic thumbs up! – but maybe give the third a miss, and the fourth and fifth with a note about evolution in the front.

What's the ideal age range? I'd think kids in Grades One to Three are sure to enjoy them.

Akimbo and the Lions is available at Amazon.com and Amazon.ca.
Posted by Jon Dykstra at 6:30 AM