5 more comics that are good, but not "really good"

The name of this blog is "really good reads" and that is, with the occasional exception, what we aim to share. But this is one of the exceptions.

Graphic novels have become a very popular genre in the last very years, and for good reason. At their very best, they are the combination of two art forms: writing and drawing. And, like pictures books, they can sometimes get even the most reluctant reader interested in books.

But great comics are still in scarce supply, and horrible ones are everywhere. So if your teen is devouring one graphic novels after another, we recommend a lot of great ones on the blog. And if they tear through those, well here are some quite good, if not necessarily great, graphic novels that you can steer them to next. 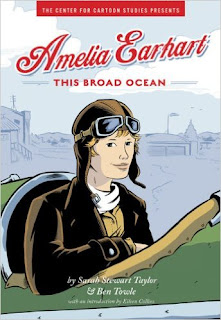 Amelia Earhart was an American who was the first woman to fly across the Atlantic Ocean. She is known best for this feat, as well as her mysterious disappearance during an attempt to fly around the globe.

This biography is a small slice of Earhart's life, taking place primarily in the small Newfoundland town of Trepassey in the week before Earhart's 1928 Trans-Atlantic voyage. We get to see the preparations through the eyes of young girl, Grace, who is the towns self-appointed journalist.

It is a beautifully illustrated story, done, in black, white and blue – it isn't full color, but a reader may not even notice. The story is also engaging. And while their is a undercurrent of feminism throughout the book, it is a not the strident sort of today. This is the kind that said, "Women are people too." Or, "Women are capable too." In other words, it is a reasonable sort, the kind that Christians can get behind too.

That's not to say that Amelia Earhart's feminism was the Christian sort. She was by some accounts a very liberal women - she got married by neither promised to be, nor required her husband to be, faithful. But that doesn't come up in this graphic novel – this is the G-rated version of events.

But while feminism isn't a problem here, there is one notable issue that gets glossed over, and parents need to point it out. Amelia Earhart is famous for doing things that had already gotten others killed. And she herself died while attempting another one of these feats. In this book she is held up as a hero, but is it heroic to risk your life doing something that is both incredibly dangerous, and not necessary?

This is a question worth asking, particularly among the young people who would be most interested. God gave us our lives, and He tells us to make the most of them. That's why our lives are not to be valued lightly, or endangered needlessly.

The only other caution? I'll mention that there is one instance in which God's name is used, but I think it is appropriately. When a sailor goes missing, a woman says, "God save 'im."

Earhart remains famous to this day, and this beautiful and engaging comic is a wonderful way to learn a little about her. The only reason I rate this is just good, and not great, is because of the way Earhart is presented as a hero to admire. She was admirable in some ways, but in what she was best known for – the reckless endangerment of her life – she most certainly was not.

Cast Away on the Letter A 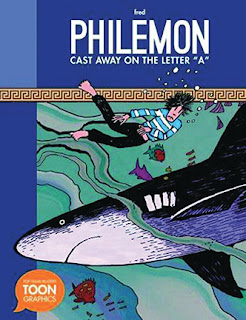 When you look at a world map, and then focus in on the waters between Europe and the Americas you'll find the words "Atlantic Ocean" there somewhere in big and bold letters. What if those weren't just letters? What if, in some crazy mixed up alternate but parallel Earth, those were actually letter-shaped islands in the middle of the ocean?

That there is the premise of this little story. Philemon, a French farm boy, falls into a well, and the currents in the well sweep him past fish and sharks and , and eventually deposit him on the sandy shores of the first letter A in the "Atlantic."

That is a crazy beginning, and as you might imagine, this is a crazy island, with two suns, and exploding clocks that grow out of the ground, and a centaur butler. Philemon eventually finds another human on the island, Bartholomew the well digger, who fell through a well he was digging and end up stranded on the island, looking for a way back for the last 40 years.

This is surreal, crazy, Alice-in-Wonderland, type of fun. And as you might expect from a story that takes place on the A in Atlantic, there are lots of surreal jokes throughout, like full-size ship in a bottle sailing through these waters.

The only caution is a minor one - a few characters express anger using made up curse symbols like these: "#@?!!" Philemon's father, who is only a minor character is this first story, is an ill-tempered sort, and makes use of these symbols a few times.

Two more of Philemon's tales, The Wild Piano, and The Suspended Castle, have also been translated from the original French. They are even stranger, and the stories take seemingly random turns – they border on being nonsense. I like a little absurdity every now and again, and so quite enjoyed the first, but the next two were simply too weird for me.

I'd recommend Cast Away on the Letter A to boys from 9 to 12. 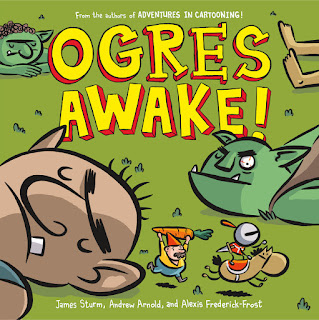 Jame Sturm has written a book, Adventures in Cartooning, in which an elf teaches a knight about cartooning as they set out to rescue a princess. It's a fun book, but marred by the occasional golly and I think, one geez.

This is a sequel of sorts, but without those verbal miscues. The knight returns, however much of the cartooning focus is set aside (though the first two pages, and the last two pages of the book do show kids how to draw some of the characters).

In this outing the brave knight discovers giant ogres asleep outside the castle. When he alerts the king, he urges everyone to ready themselves for battle. But instead of battle, they are intent on making something in the kitchen instead. A potion perhaps? Nope [SPOILER ALERT] they are making soup, to put the low-blood sugar ogres in quite a bit better mood after they partake.

It's a fun silly funny adventure and kids will really like it. The only downside is the short size - just 34 pages.

You can pick it up at Amazon.com here and Amazon.ca here.

Jim Curious: A voyage of the heart 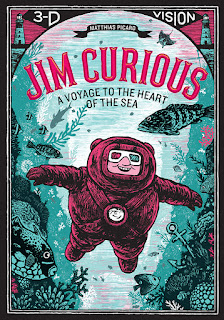 This is a very, very fun book. Our hero, Jim Curious, emerges from his house equipped in a deep sea diving suit, and as he slides into the sea, the pictures transform – now everything is 3D! This is a large format book, more than a foot tall, and the author makes full use of the giant pages to give us so much to see and explore.

It is also a wordless book, with the story comprised of Jim Curious exploring, and us just marveling at all there is to see. He passes by a sunken pirate ship, World War II fighter, and grocery cart, then floats right up to a giant whale, and, finally, discovers the ruins of an underwater city. Here the adventure takes a surreal twist as Jim finds a door in the bottom of the sea. As he opens it, where does it lead but back to his own house – somehow this is his own front door! But this time, when he walks through and emerges once again from his little house, things have gone all topsy turvy. The air is now where the sea had previously been, and sea is where the air had been – whales and fish and octopi are swimming past the windows of his house! It is a funny ending to this gorgeous visual feast.

The only downside to the book is that it does require 3D glasses (two pairs are provided) and also has one double foldout section, where the pages fold out from the middle. Jim Curious is clearly intended for young readers but the glasses and the double foldout are just not the sort of thing young children will do well with: the foldouts are going to get torn or crumpled and the glasses will be broken or lost. That means that, despite the book being wordless, it still needs to be read with mom or dad present.

You can pick it up at Amazon.com here, or Amazon.ca here.

The Wright Brothers: A Graphic Novel 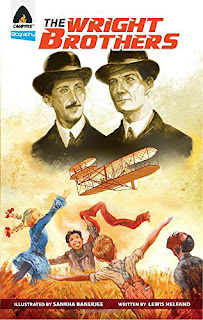 While the artwork is just okay the two subjects are absolutely fascinating. Orville and Wilbur Wright – the first to develop powered flight – were inventive right from their childhood. Of course, childhood inventions aren't always so successful: one notable failure we get to see is the Wrights' attempt to make their own chewing gum out of tar and sugar.

The first twenty pages are devoted to the Wrights' early years, before they did any flight experimentation. Orville, while he was still just a teen, started off with a toy printing press and grew his business until eventually the Wrights were running their own newspaper and printing company. The printshop's success allowed the brothers to pursue other interests, and the next thing they tackled was bicycles. Back then bikes had a big wheel in front, and the modern version, with two wheels of the same size, had only just been invented. This new type, called a safety bike (because it was so much easier to get on) caught the Wrights' attention, and before long they had opened a shop and started building and selling their own.

While this is a Wright biography, it is also a history of powered flight experimentation, making it all the more interesting. There sure were a lot a failures (some fatal!) before the Wrights finally showed the way.

Now I haven't even gotten into the most interesting part, the actual flight experiments. But rather than share every bit of the story, I think I'll conclude with the only caution I can come up with. It concerns how the Wrights weren't so wild about school - Orville skipped a whole month at one point - and their parents didn't mind. That might not be the best example for the young readers who will be looking this over.

That one caution aside, this would be a fun one for Grade 3 and up.

You can pick up a copy at Amazon.com here and Amazon.ca.
Posted by Jon Dykstra at 12:08 PM