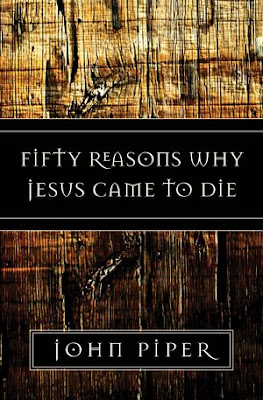 First of all, two notes about the tags at the bottom of the review, and one challenge:
So, after a couple of suggestions about how and why to read Piper's meditations, here's a little bit of what's in Piper's work. The introduction deals with the connection between "Christ and the Concentration Camps." Piper begins with the devastating but necessary and meaningful answer to the question of who killed Jesus: "God did" - because "God meant it for good." For that reason, as Piper says, the


"controversy about which humans killed Jesus is marginal. He chose to die. His heavenly Father ordained it. He embraced it."

God's "embrace" of the purpose(s) of Christ's death was shown by Christ's resurrection. Piper's introduction ends with a consideration of how Elie Wiesel, the well-known Jewish historian of the Holocaust, links the death of a single victim of the concentration camps to the death of Christ, asking


"Is there a way that Jewish suffering may find, not its cause, but its final meaning in the suffering of Jesus Christ?"

Piper's repudiates the anti-Semitism of some Christians by noting that Jesus, himself a Jew – with all Jews as His early followers – died a meaningful death, so that much "more important than who killed Jesus is the question: 'What did God achieve for sinners like us in sending his Son to die?"
Fifty two-page chapters answer this all-important question. The first should be obvious to any Christian: "To Absorb the Wrath of God." The last takes us back to the introduction: "To Show That the Worst Evil Is Meant by God for Good." Piper ends with a prayer that is also an appeal to his readers – that they would accept Christ's death as meaningful and purposeful for themselves as well, "the most important event that ever happened."

A bibliography of books that address the historical reliability of the Bible in chronicling Christ's life is a further resource to address those still doubting the accuracy of the New Testament.

If you believe that knowing the Fifty Reasons Why Jesus Came to Die will strengthen your ability to glorify God and make His greatness known to others, you can get it as a free pdf here or you can buy a paper copy at Amazon.com here, or Amazon.ca here.