Lest we forget... it wasn't just Hitler 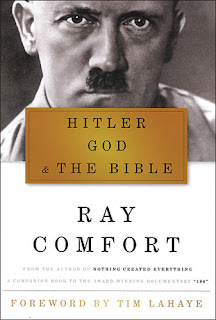 We raise our children to be obedient and to respect those in authority. But we must also teach them that God is a higher authority, and that even if it was their own mommy and daddy telling them to do something contrary to what God demands, then they would need to say no.

We need to teach them that a time may well come (doesn't it seem inevitable?) that their country, their boss, their co-workers, union, friends and maybe even their parents, may ask of them something that the only proper response will be "No, I cannot do that, because that is contrary to what God has said."

In his book Hitler, God, and the Bible the author notes that while Hitler was the leader, it was because he had so many willing followers that the was able to perpetuate the evil he did so effectively. As Ray Comfort explains,


Almost every part of Germany's bureaucracy had a hand in the killing process. Churches and the Interior Ministry produced the necessary birth records identifying those who were Jewish. The Finance Ministry confiscated Jewish wealth and property. The Postal Service delivered the notices of deportation and denaturalization. The Transportation Department arranged for trains to transfer Jews to concentration camps. Even the private sector cooperated in the efforts. Businesses fired Jewish workers. Pharmaceutical firms tested drugs on camp prisoners. Companies bid for contracts to build the crematoria. Universities fired Jewish professors and expelled Jewish students. It seems that the whole country unified to make the procedure work like a well-oiled machine.

So one of the lessons we must never forget is that it is no excuse to say "I was just following orders" when you know those orders are evil.