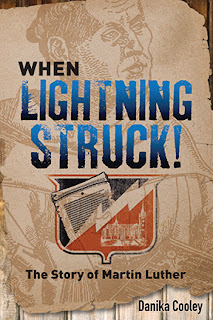 This is a treat!

October 31, 2017 will mark 500 years since Martin Luther nailed his 95 theses on the church door in Wittenberg and I can't think of a better way to learn about the man and his impact than grabbing a copy of Danika Cooley's When Lighting Struck!

The target audience is teens, but like any fantastic book, adults are sure to enjoy it too. In fact, this is the perfect book for any adults who feel like they should know more about church history, but are reluctant to get started. That's how I'd characterize myself. As a student I hated history - learning dates and names seemed pointless. Now I understand it is important to know where we came from, so I want to know more....but I have no interest in learning it from a dry, dusty tome.

That's why this was such a treat. The author has taken Luther's life, and turned it into a novel. That means parts of this are fictionalized, including lots of the day-to-day dialogue, but the key events are all true. And it didn't take much to make Luther's life exciting: as doubt-filled as he was early on, the Reformer was even more bombastic after he understood the importance that forgiveness is a gift given, not earned. This is a man who:
And it would be easy to go on and on.

Put the story of such a man into the hands of a talented writer and what you're left with is a book anyone will just tear through.

While it's fictionalized, one strength of the book is in the genuine quotes that are interspersed throughout (these are identifiable by the endnote numbers after such quotes). One example: in a debate at Lepzig University, Johann Eck hits Luther with a stinging question:


"Are you the only one who knows anything? With the exception of you, is all the church in error?"

It stings because Luther, plagued by self-doubt, has been wondering this very same thing. But Luther also knows that God's truth doesn't depend on Luther being brilliant. Nope - God can spread his truth using even the dumbest of beasts, as Luther notes in his reply:


"I answer that God once spoke through the mouth of a donkey."

Another strength is how the book reveals the whole man, warts and all. Cooley largely skips over Luther's love of scatalogical insults (this is a book intended for younger readers, after all) but is clear about how Luther's anger stung not only the pope, but allies as well. Luther believed:


"It is precisely because of my outbursts that the Lord has used me! I never work better than when I am inspired by anger; for when I am angry, I can write, pray, and preach well, for then my whole temperament is quickened, my understanding sharpened."

There is a time and place for anger, and God made good use of Luther's righteous anger. But later, as Luther aged, it seems he came to indulge in anger, and that got him and others into trouble. Cooley shares how Luther's anger cost him friends. And in his anger he wrote a tract condemning the Jews, who were already facing persecution. He also encouraged princes and rulers to violently put down a peasant rebellion. So he used his influence for great good, but his anger meant that at times his influence also caused great harm.

When Lighning Struck! would make a great present to just about any reader, particularly if they have even the slightest interest in church history.

I'd even recommend this to teens who have the same bad attitude towards history that I once did. For them, this might be a bit of a gamble, but if you can get your son or daughter to promise to read through the first 60 pages, that should have them hooked.

Buy When Lightning Struck! at Amazon.com here or Amazon.ca here and they will send a tip our way at no cost to you.

RELATED REVIEWS: Other fictionalized biographies on the Reformers