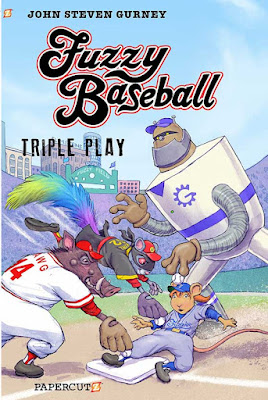 This is, as the title references, three stories in one, each involving the Fernwood Valley Fuzzies baseball team taking on a different opponent. The Fuzzies are quite a cuddly team, even if their manager is a bear. Other players include a koala, a wombat, and a penguin.

In the first story we’re introduced to their biggest fan, Blossom Possum. But when the Fuzzies keep losing to their rivals, the Rocky Ridge Claws, this fan decides she has to do more than cheer from the sidelines: Blossom tries out and makes the team! But can a little possum really get a hit playing against the fearsome critters of the Red Claw? What can she do versus a crocodile, warthog, bull, rhino, or wolf? As you might imagine, there is a happy ending.

In the second story, the team travels to Japan to play the Sashimi City Ninjas, a polite, but very cocky lot that leaves some of the Fuzzies feeling intimidated. Things get crazy when the Ninjas are able to amplify their baseball skills with a “morfo-power blast” – this is riffing off of Asian cartoons where characters often have some kind of secret power boost they can employ when they most need it. But when the Fuzzies take advantage of this power blast too, it’s homeruns all around, but, as Blossom notes, “This isn’t baseball.” A fun quirk to this story is two alternate endings, the first where it was all a dream, and the second where it wasn’t.

In the third story the Fuzzies discover that the team they are playing are actually robots. Can they beat mechanical wonders? The Fuzzies are up for finding out.

This is a collection of what was first three separate books – Fuzzy Baseball, Ninja Baseball Blast, and RBI Robots – and while I have no concerns with any of them, I’ll mention that the fourth book, Di-no hitters. This time the Fuzzies are playing a team of dinosaurs, and while I’ve only read the back cover, it has a couple of allusions to evolution, so I suspect that one will have more than a few jokes about millions of years and such. So, pick up Triple Play, but it might be worth giving book #4 a miss.

This is a kid’s comic that sticks to that target audience: it’s fun, creative, and while this isn’t really trying to teach kids anything, whatever morals there are to the stories (maybe, “be a good teammate,” or “work hard,” etc.) are ones we can appreciate. This would make for a fantastic Christmas present for any kid who likes baseball, fuzzy animals, comics, are even none of the above.