The Flames of Rome 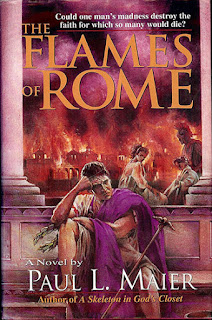 If you like history, church history, or historical fiction, you’ll likely love this well written tale of Rome in the time of Nero. The Flames of Rome recounts Nero’s rise to power, his reign as emperor of Rome, and his ultimate brutal death.

Though the book works with historical characters and detail, it’s still fictional. It’s useful to give you the full flavor of the glory, and the immorality, that was Rome. Nero, as one of Rome’s more depraved emperors, is depicted in all his disgusting glory. His fascination with his friend’s wife, and his ultimate success in taking her for himself is real enough. Her desire for Nero, her seduction of him is a useful plot device that could’ve happened but probably didn’t.

What made the book fascinating for me was the way the rise of Christianity was woven through the storyline. Early on, the character Pomponia encounters Christianity and is sorely tempted to get involved with this strange yet exciting sect. This, naturally, causes friction between her and her very Roman husband. The trouble does not stop there. Pomponia’s daughter, Plautia, becomes a Christian as well. Her new husband, Sabinus, happily indulges her beliefs in this offbeat Jewish sect, but becomes more influenced by them than he might have imagined. Sabinus, in his eventual role as governor of Rome, must struggle with his desire to free Rome from the insanity of Nero, while trying not to betray the Christian beliefs he is increasingly calling his own.

The only caution I have about this book is that if you are squeamish, this tale may not be for you. While Maier writes with delicacy, it’s still clear that Nero is bisexual, and that Christians die in horrible, terrifying ways. Maier strikes an admirable balance between letting his readers know of the depravity of Rome without using needless and titillating detail. Yet the gross reality is there since a tale like this cannot ignore it.

It’s a good tale and it makes for an easy read. It’s historical fiction that’s good enough that it could’ve happened. Read this book.
Posted by Linus at 1:11 AM