The Post-Christian Mind (and Heart) 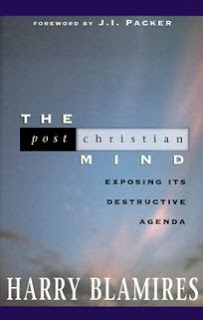 Death in the City
by Francis A. Schaeffer
143 pages / first published 1969

I actually started Blamires' book first. Only after I started reading Schaeffer's work did I realize that both dealt with the post-Christian mind. Once I noticed that, a comparison of  the two seemed like a 'really good' idea. Blamires began with two advantages: fame and currency.

What do I mean by that? Well, Blamires is known for his minor classic The Christian Mind, and The Post-Christian Mind was published thirty years later than Schaeffer's work. Given these facts, I anticipated that Blamires' work would be the really better read of the two, or at least more useful in reacting to the post-Christian mind - the mind that continues to shape our Western culture today. Read on to find out whether I was right.

What intrigued me most about Blamires was that he was a student of C. S. Lewis (more reviews of Lewis lore here), and you can see Lewis's influence in Blamires's book. Blamires' analogies, like Lewis's, often show vivid insight into things that I had never carefully thought about. For example, he illustrates the difference between quantitative reasoning and qualitative reasoning with the contrast between saying 'This garden covers two acres' and saying 'This garden is beautiful.' Both types of description can apply to a garden, but if we determine morality by consensus (quantitatively), we are stuck with, as Blamires calls it, 'the tyranny of the average.'

On the other hand, his view of insurance and advertising has nothing clearly Christian (or commonsensical) about it. He views both as a kind of taxation, since we cannot choose whether we will pay for either, as both get folded into the prices of products we buy. While there is certainly much to criticize in the content of advertising, his criticism ignores the necessity of information to make wise purchases. If we don't want to pay for advertising, we can find information on less adverised products from sources like Consumer Report (which we would, of course, have to pay for). As for insurance, aside from the insurance that is required by law, we could, perhaps, avoid insurance by only buying products when we have enough savings to replace them if necessary - a tall order! In other words, insurance is not merely a tax, but is an actual service.

In the end, Blamires' analyses too often sound like the rants criticized in Ecclesiastes 7:10 - "Say not, 'Why were the former days better than these? For it is not from wisdom that you ask this." In contrast, Francis Schaeffer's Death in the City avoids sounding like mere complaint, even though Schaeffer's analysis of our culture relies strongly, to begin with, on his analysis of the relevance of the "weeping prophet," Jeremiah. 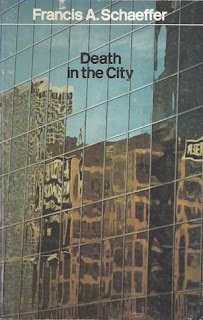 If Schaeffer has a weakness, it is that his exegesis of prophecy and lament from Jeremiah identifies the city and nation of Jeremiah's time with the city and Western nations of our time. While that may be questionable, given that Western nations are not, and have never been, God's covenant people, there is a strong parallel between the apostasy of Judah and the post-Christian rejection of God by cultures, as a whole, that have benefitted from Christian values, especially since the Reformation.

The strength of Schaeffer's analysis, on the other hand, is his compassion, his identification with the despair of post-Christian culture, and his focus on reacting not only to the post-Christian mind, but also the post-Christian heart. The first chapter speaks of the literal hunger of Jerusalem's people as parallelling the spiritual hunger of our time (his 1969 not being all that different from now, almost 50 years later); however, Schaeffer does not let modern man off the hook. It's not the case that man is searching for God; rather, people look for meaning in anything and everything but God. Schaeffer also warns Christians that we too must be persuaded that there is no cure for our culture but the Word of God, so that, of necessity, compassion for people trapped in the lies of our post-Christian world will include a message of God's judgment.

Schaeffer also cautions us in the church (and in our Christian organizations and educational institutions) not to fail to speak that message, not to fail to speak it passionately, and not to soften it with a rejection of any part of the truth of God's Word - as the leaders of Jeremiah's time did with his word from God. He exhorts us not only to preach the truth, but to live it, to face the cost of  preaching and living the truth of God's word - as Jeremiah was told that he must do - in a society that has rejected God.

The last four chapter turn from Jeremiah in Jerusalem to Paul bringing the gospel to the Romans. Schaeffer shows how Paul first speaks to the man without the Bible, showing how man is lost, but great - a rebel, yes, but a rebel made in the image of God - so that the gospel is the power of God not only for a narrow kind of otherworldly salvation, but also for the rebuilding of the whole man in all his cultural endeavours. Schaeffer gives examples of how, since the meaning of life can only be received from God Himself, people have demonstrated the judgment of Romans 1 on those who reject God - that they also reject and lose touch with reality. On the basis of Romans 2, Schaeffer demonstrates that God is just in judging the man without the Bible, because we judge ourselves every time that we judge others by whatever standards we know through our being created in God's image.

But this universal guilt also brings us as Christians a universal responsibility - to treat our fellow rebels with compassion. As we do so, however, Schaeffer uses the image of the universe with two chairs to call us not to sit in the chair of the materialist. Materialists explicitly believe that there is no God in the universe, but Christians can easily act as if that were true. We are exhorted to live by faith in God - facing the lostness of man without God, but extending compassion to others in the name and in the power of Christ.

Whichever of these two you find to be the more useful in coping with or reaching out to our post-Christian world, you can find Schaeffer's book here, and/or Blamire's book here.