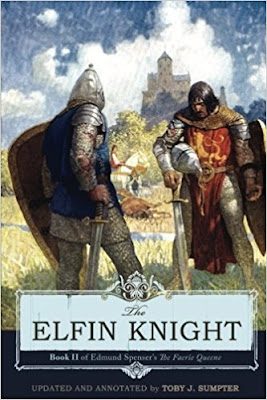 Last month I reviewed an update of Book One of Edmund Spenser's The Faerie Queene. I knew that I would be reviewing the next volume in the series soon, but I was a little worried that it would not be as good a read. Book I, after all, was based on the legend of Saint George, the patron saint of England. How could Book II be as good? Hollywood has shown how few sequels measure up to the original.

Of course, the second book of The Faerie Queene is not really a sequel. Rather, it's a totally new adventure showing us, symbolically, another aspect of the Christian life. Our new hero is Guyon, who stands for temperance. Ironically, we meet him first when he is almost tricked into attacking Saint George, the Redcrosse Knight who is the hero of Book I. This near double homicide illustrates just how difficult it is to keep one's temperance.

Toby Sumpter's introduction and generous footnotes make it clear that Spenser is showing that temperance – taking the middle way – is not merely a passive quality, but involves using wisdom to find the right path, and then pursuing it with full heart. In a world where temptation tests temperance tenaciously (pornography, the glorification of violence), it is important to see that maintaining a temperate approach is ultimately an adventure - the spiritual warfare that Paul tells us about in Ephesians 6.

Like Saint George, Guyon has a sidekick. While Guyon represents the strength of the temperate man, his companion, the Palmer, represents the wisdom needed to find the right path. Book II also has a counterpart to the House of Patience - a castle laid out like the human body that shows how temperance combats the temptations of the seven deadly sins and the moral challenges brought to us through our five senses, in a couple of epic battles that end with the triumph of another figure from Book I - Prince Arthur. What makes Prince Arthur a little more fun in this volume is his reading of the history of England (including a version of the story of Shakespeare's King Lear) - a story that ends just before the rise of King Arthur. Hmmm... Prince Arthur, King Arthur - any connection?

Another parallel to Book I is Guyon's own epic quest - to destroy the Bower of Bliss, a sensual but ultimately false paradise that subverts the manliness and the very souls of the knights who become entrapped by the wanton pleasures of the witch Acrasia. Guyon has encountered the temptations of both male fury and female beauty earlier in the story, but, having seen the death her enchantments have already brought, how will he handle her added lure of illicit artistic depictions?

Roy Maynard's followed his update of Book I of The Faerie Queene with an insightful epilogue. Sumpter ends his with a short play that picks up on the most approachable plot points of the story for students to act out – a nice little bonus that shows that temperance is more than just thrift or prudish abstinence. Like Spenser, Sumpter shows us that temperance is well-directed generous and zealous effort.

If you think The Elfin Knight is joust what you or the young warriors in your life needs to remind you of just how courageous it is to resist temptation, you can get it here.
Posted by Jeff Dykstra at 4:00 AM