A Guide to Discussing Assisted Suicide 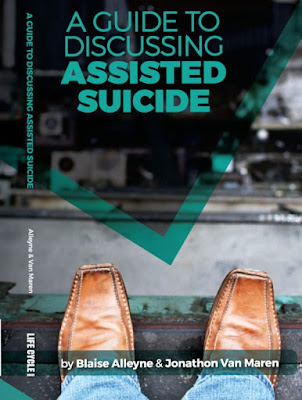 I hope that many who are reading this are wiser than I have often been, but I wonder if, as was the case for me, some pro-lifers found it difficult to oppose euthanasia as passionately as we oppose abortion. How do you help someone who doesn't want to be helped - who wants to die?

Of course, that emotional tension is exactly parallel to the hard cases that are typically presented to pro-lifers in the abortion debate. Just as in that debate, the key is to find the central issue. With abortion, the main question is, "Who is the unborn?" There are only two options. If the unborn is not human, there can be no justification for 'its' surgical removal, but if the unborn is human, then there can be no justification for killing  him or her. Similarly, the crux of opposition to  euthanasia is the question, "How do we help those who are feeling desperate enough to want to kill themselves?" There are only two options: either we prevent suicide, or we assist it.

That's where Alleyne and Van Maren's book comes in. These two men with extensive experience in the pro-life movement break down the debate in terms of that central question. They start with framing the debate

The second chapter explores the first of those three positions. The job of pro-life apologetics is to show the inconsistency of the split position, which suggests that we should prevent some suicides while assisting others). The authors give ways to counter the reasons often used to justify some suicides, given by the acronym QUIT. They show that arguments based on Quality of life, Unbearable suffering, an Incurable condition, or a Terminal prognosis are fallacious, largely because they are based on ageism and ableism. In the same way as arguments against abortion bring out "two-year-old Timmy" to show that we should not be killing human beings at any level of development, arguments against euthanasia show us the healthy 19-year-old to help us realize that it is wrong to assist the suicide of anyone, of any age or level of health - because as the authors put it, "suicide is a symptom [of despair], not a solution."

Chapter 3 deals with those who are (sadly) willing to be consistent and advocate total choice for all who desire to be assisted in ending their lives. The only response is to insist that the suicidal need love even more than they need argument.

The fourth chapter shows how dangerous it is to accept either the split or the total choice position, because they have always involved a slippery slope toward more and more assisted killings, they reduce the willingness to prevent suicide, and they undermine the morale of everyone who works in any facility that provides suicide assistance.

Finally, the authors show the pro-life position. It is not mere vitalism, and so allows for

The pro-life position also offers positive responses to the suicidal: psychological health resources, pain management, palliative care, and dignity therapy. The authors end with two pleas:
Alleyne and Van Maren admirably give us the tools to carry out that responsibility. Given the urgency of the push toward euthaniasia in both Canada and U.S., more of us should be reading this book.You can order it from Life Cycle Books (including the option to buy it in bulk for your pro-life group or circle of friends at greatly reduced prices).
Posted by Jeff Dykstra at 4:30 AM