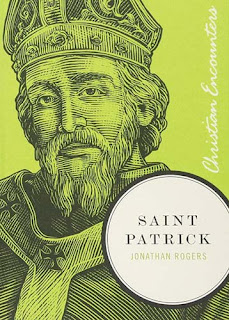 My mom was born on St Patrick's Day, and that was reason enough to check out Jonathan Roger's short, engaging biography of this Irish legend.

St. Patrick (385-461) is famously credited with driving the snakes out of Ireland. Other Patrick legends are equally impressive, and just as erroneous. But while legends abound, facts are hard to come by. As Jonathan Rogers explains, the most substantive information we have about Patrick comes from just two documents, which are the only pieces of writing we have from the man himself.

The first, The Confession of Saint Patrick, lays out his theological beliefs, even as he shares the story of his capture and escape from the Irish raiders. The second, The Letter send to the soldiers of Coroticus, was a plea to a British raider to return the newly baptized Irish Christians he had stolen and taken off to slavery. These two documents are included, in their entirety, as appendices in the back of this slim volume, and amount to 29 pages.

Rogers uses the remaining 100 pages to put Patrick's writings in a historical and cultural context, with perhaps the biggest eye-opener being that with the Christianization of the Roman Empire, people of the time saw outside the Empire as being outside the Church. That's why Ireland hadn't been evangelized to this point. It was outside the Empire, so it almost unthinkable that the people there could still become Christian.

But it wasn't inconceivable to Patrick. My takeaway from this book is that what made Patrick special was his zeal for lost people that others thought irredeemable.

I will add, though, that I don't think Patrick's a saint we really need to know more about. So, even as I think this is a really good read, I'd put a number of other biographies ahead of it. We only have so much time, after all, so if you don't know much about saints such as Martin Luther, Isaac Watts, or Corrie Ten Boom, those would be better people to start with.

Pick it up at Amazon.com here and Amazon.ca here.
Posted by Jon Dykstra at 9:51 AM