Innocent Heroes: Stories of animals in the First World War 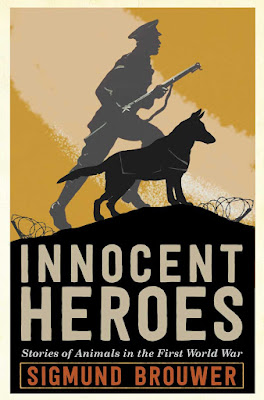 Animals had a bigger part in the First World War than most of us realize. Author Sigmund Brouwer has taken stories of World War I animals at their most heroic, and paired them with stories of these animals in their perhaps even more important everyday work too.

While all the animals stories are based on real events, these animals served in a wide variety of Allied forces (Belgian, American, French and more), so, in the interests of making a continuous, compelling storyline, Brouwer fictionalized the accounts, placing them all in the confines of just one Canadian platoon, the Storming Normans.

While each chapter is built around the story of one particular creature –a cat, a bird, two dogs, a horse, a mule, and a lion – the book's main characters are three fictional Canadian infantry soldiers: Jake, Charlie, and Thomas, who help and are helped by these "innocent heroes."

In the trio of Jake, Charlie, and Thomas, the author gives us soldiers who couldn't have more different backgrounds, with Jake a farm boy, Charlie the city-dwelling son of a millionaire, and Thomas a Cree Indian. There is fun to be had in this "odd couple" set-up, particularly that of Charlie and Thomas: the snooty Charlie doesn't know anything about natives, but doesn't let that stop him from thinking very little of them, and Thomas, without hardly saying a word, manages to teach Charlie a lesson or two (which Charlie has to learn the hard way) and, eventually, wins him over as a friend.

It's clear the author had three goals with this book. He wanted to:
This third element comes out in Charlie's early obnoxious treatment of Thomas, and also later when Thomas shares a little of his experience on his reserve, and in a residential school. However Thomas' quiet nature means this is only done in passing. It is only in the book's last chapter, after the soldiers have returned home, that we get a longer look at Thomas' life, and how natives were impacted by government policies back then that wouldn't, among other things, allow them to leave the reserve without permission from a government agent.

One criticism some might have with this book is that it is not entirely realistic. All of our animal and human heroes survive, and though Brouwer details some battle scenes, I don't think we even read of enemy soldiers dying.

But considering this is intended for a pre-teen to teen audience, that's just keeping things age appropriate. In a two or three-page interjection at the end of each chapter, Brouwer includes a short account of the real animal that inspired the chapter, and in these short accounts he gives a few more of the grim details. But it is still done in an age-appropriate manner. In fact, though I did have to mute a few of the more descriptive details of a rat crawling on a soldier's face, Brouwer's tactful approach has allowed me to read this to my 5 and 7 year old.

The only other criticism might be that, when it comes to Natives' treatment, we hear only one side - the harm done to the Natives by the government. I don't know enough of that time to do anything but wonder if there was also harm being done to the Natives by the Natives too. But, I will say again, this is a children's story, so we can't expect it to dig too deep. Brouwer raises an important issue, and does it in a delicate manner appropriate for his audience.

My highest praise for a book is that it is so good I have to read it to my family. We're half way through this one, and my wife, and two oldest girls want me to keep going. And this even after one particularly touching chapter - the tale of a brave pigeon – left both me and my most sensitive daughter with tears in our eyes. I should also mention that other sections have had us laughing so hard I couldn't be heard over the howls!

Brouwer has weaved these animals' stories together into a compelling book that tackles some tough topics at an age-appropriate level. And he even manages to conclude it with a happy ending. Two very enthusiastic thumbs up!

You can pick it up at Amazon.ca or Amazon.com, or ask your local library to get a copy.
Posted by Jon Dykstra at 2:19 PM