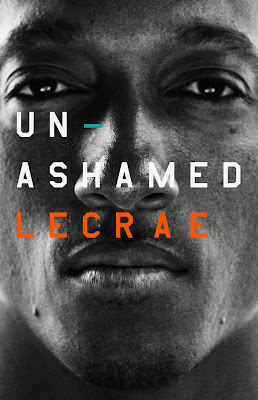 Though you can't judge a book by its cover, some books definitely have the kind of "curb appeal" that makes them worth investigating. Unashamed is one of those books. Eric Metaxas, Andy Crouch, and Nancy Pearcey, the authors of some pretty acclaimed Christian non-fiction themselves, laud Lecrae's work (both his music and his memoir) for its beauty and its boldness.

Of course, that's all marketing – sincere, no doubt, but still marketing. What really pops out at you from the back cover is the pull-quote from the book: "If you live for people's acceptance, you'll die from their rejection" – an insight Lecrae has spent most of his 30+ years learning.

Like most of us, Lecrae spent (and still spends, like most of us) much of his life craving acceptance. Several kinds of heartbreak molded that ultimately vain quest into the shape it has taken in his life. First, while he was still very young, he and his mother were abandoned by his abusive father. Second, he was also abused verbally and physically by the other adult males in his extended family. Finally, he was sexually abused by his babysitter.

All these factors meant that not only was Lecrae desperately seeking others' approval, but he was finding it in dangerous and damaging ways. Being involved in the gangsta lifestyle gave him male approval, but from exactly the wrong kind of leader and role model, as well as giving him easy access to drugs that he used to dull the trauma of an abused childhood. Womanizing meant that he could recreate the distorted connection between power and pleasure that his earlier sexual abuse had hard-wired into his brain.

Even after Lecrae became a Christian, he still sought to earn acceptance, this time from God. He became a legalist, frantically trying to make up for the sin in his life with service to God, even seeking persecution by shoving the gospel in people's faces without real love for or relationship with them. Of course, legalism leads to hypocrisy, and Lecrae's life soon became dualistic, living with one foot in the world and one foot on the way out of the kingdom of God. As he puts it, "I saw my connection with God as a contractual relationship, rather than a covenantal relationship." His contrast of the two is, at first, a little iffy: "All contracts have terms, but covenants don't. They last forever." It would be more accurate to say that covenants, unlike contracts, are all-encompassing, demanding total commitment; however, his last statement regarding the contrast is a good way to counteract the danger of covenantal arrogance that both ancient Israel and modern Christians (especially Reformed Christians?) fall prey to: "In a covenantal relationship, you're only concerned with loving the other party as much as you can."

By God's grace, Lecrae began to finally understand that grace, and his hip-hop music paralleled his life in his transition from contractual legalism (leading to preachy condemnation) to understanding and response to God's covenantal love in Christ – reflected in honest, unashamed admission of his own sins and weaknesses. This outreach to both Christians and non-Christians was also prompted by his reading of Francis Schaeffer and Andy Crouch, who call Christians to do more than merely condemn, critique, consume, or copy culture - but instead to begin creating culture.

While creating music that reaches out to a fallen world and working with others in the music business whose artistry does not stem from a love for Christ, Lecrae faces the challenges of what 1 John 2:16 calls "the desires of the flesh" (lust and sex), "the desires of the eyes" (love of luxury), and "the pride of life" (the desire for people's acceptance). His revelation of these dangers in his life, and how he copes with them, is a good reminder that we need to worry more about worldly culture – advertising, social media, movies, music – than about worldly people. You can't minister to culture; you can only resist or conform – but you can minister to people. When your interaction with the people of the world around you is truly ministry motivated by your response to the gospel of salvation, then, Lecrae makes clear, like the apostle Paul, you have nothing to be ashamed of: "For I am not ashamed of the gospel, for it is the power of God for salvation, to the Jew first and also to the Greek" (Romans 1:16).

If you believe that Lecrae's book can give you a good glimpse of what it means, personally and culturally, for Christians to be Unashamed, you can get it at Amazon.com here and Amazon.ca here.