A passage from "The Hiding Place" I can't manage to read out loud... 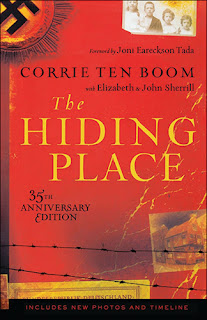 Corrie Ten Boom's autobiographical The Hiding Place is best known for its account of her war time experiences. But one of the many powerful sections in the book is about something that happened decades before, in the year 1919.

Corrie's describes her Tante Jans as a Christian social activist, who helped the poor, and also wrote tracts and pamphlets decrying such evils as mutton sleeves and bicycle skirts. In other words, a busy, well-meaning, but generally humorless lady, who was trying to earn her way to heaven.

When the doctor diagnoses her with diabetes it is quite a shock as there was no real treatment at that time. It meant that Tante Jans had very little time left, maybe a few years. Her response? "And from then on she threw herself more forcefully than ever into writing, speaking forming clubs and launching projects."

But then one day her weekly blood test came back black. Black meant she not longer had years or months, but merely days, three weeks at most. The family learns this before Tante Jan, and as they consider how to tell her Corrie's father hopes that: "Perhaps she will take heart from all she has accomplished. She puts great store on accomplishment, Jans does, and who knows but she is right!" So upstairs to her room they all go.


"Come in," she called to Father's knock, and added as she always did, "and close the door before I catch my death of drafts."

She was sitting at her round mahogany table, working on yet another appeal... As she saw the number of people entering the room, she laid down her pen. She looked from one face to another, until she came to mine and gave a little gasp of comprehension. This was Friday morning, and I had not yet come up with the results of the test.

“My dear sister-in-law,” Father began gently, “there is a joyous journey which each of God’s children sooner or later sets out on. And, Jans, some must go to their Father empty- handed, but you will run to Him with hands full!”

“All your clubs…,” Tante Anna ventured.

But our well-meant words were useless. In front of us the proud face crumpled; Tante Jans put her hands over her eyes and began to cry. “Empty, empty!” she choked at last through her tears. “How can we bring anything to God? What does He care for our little tricks and trinkets?”

And then as we listened in disbelief, she lowered her hands and with tears still coursing down her face whispered, “Dear Jesus, I thank You that we must come with empty hands. I thank You that You have done all – all – on the Cross, and that all we need in life or death is to be sure of this.”