Why the Chinese, and Dutch, give their children short names.... 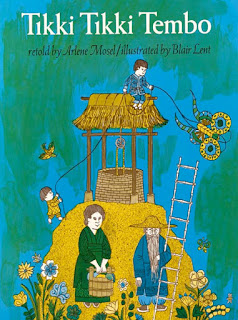 My first name is Jonathan, but long ago I learned there were benefits to using a shorter form. In basketball, for example, if a teammate was streaking up the sidelines and yelled for a pass, by the time he got out all three syllables of Jon--a--than he wasn't open any more. But "Jon!" would get my attention, and him the ball, much quicker.

Tikki Tikki Tembo is about this same lesson but in a very different setting. We are told that long ago Chinese families would honor their first born sons with long names, and give their other sons very short names. Our story takes place in a small mountain village where a mother had two sons. The second was simply called Chang, while the first was named Tikki Tikki Tembo-no Sa Rembo-chari Bari Ruchi-pip Peri Pembo. Now if these two played sports we can be sure who would be making all the great passes and who wouldn't even make the team (try fitting that name on a jersey!).

Of course, they didn't have basketball in ancient China, so their names come into play a different way. This is a charming book so I don't want to give away the ending. Let it suffice to say that as in basketball, so too in aquatic events it is better, and less hazardous, to have a shorter name.

The story is wonderful, the illustrations fun, but more than anything else this is such a joy to read out loud: Tikki Tikki Tembo-no Sa Rembo-chari Bari Ruchi-pip Peri Pembo is not only a long name, but a lyrical one, and each time it gets repeated in the story it gets funnier. This is a classic for a reason!

You can buy a copy at Amazon.com by clicking here. 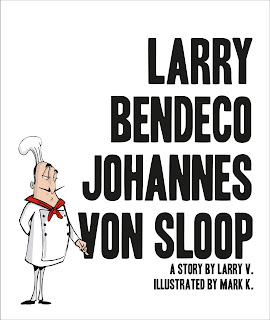 In some respects this is Tikki Tikki Tembo in a modern setting with the two brothers being Dutch instead of Chinese. One is named Bob and the other Larry Bendeco Johannes Von Sloop.

The two brothers are both bakers, but Bob specializes in plain and delicious, while Larry Bendeco Johannes Von Sloop is more concerned with fancy appearances - his cakes looks great, even if they don't taste that way.

As in the original, a long name eventually proves hazardous, but there's more to this story. When his long name causes the destruction of his bakery Larry Bendeco Johannes Von Sloop is blessed with a brother who is more than happy to help him out.

While this is an imitation of the original, the author has given it a creative twist that makes it the equal of its inspiration. It's read-out-loud fun, and will be a sure hit with the kids.

You can buy a copy at Amazon.com by clicking here.
Posted by Jon Dykstra at 6:42 AM