The Wonderful Wizard of Oz

Some classics, even with specifically unChristian elements, are still worth reading for the sake of cultural literacy. Examples would include the Greek myths, George Orwell's 1984, and Niccolò Machiavelli's The Prince. Frank Baum's The Wizard of Oz is another of this sort, a book so famous that is has spawned multiple plays, many films, near countless books, and now a series of graphic novels.

Marvel Comic's adaptation is faithfully done, and large enough to include all of the key plot points. Here's how it begins: Dorothy, a girl from Kansas, gets picked up, while inside her house, by a tornado and dropped, house and all, in a very strange land and on top of a very wicked witch. Then she is off to see an oh-so-wonderful wizard to find out if he can help her get back to Kansas.

As she sets off towards the interior of this strange land – the land of Oz – she picks up three strange companions on her way: a talking scarecrow in want of a brain, a tin woodsman wishing for a heart, and a enormous lion who desires courage. When she finally gets to meet the Wizard of Oz, he says he will only help her and her friends if Dorothy kills Oz's only other wicked witch (Dorothy did in the first when her house landed on the evil creature).

That's the gist of the story. The fun of it is that her three companions – brainless scarecrow, heartless tin woodsman, and cowardly lion – all want the wizard to help them get what they lack.  But along the way we learn that, despite what the three think themselves, they really aren't lacking in those departments at all. 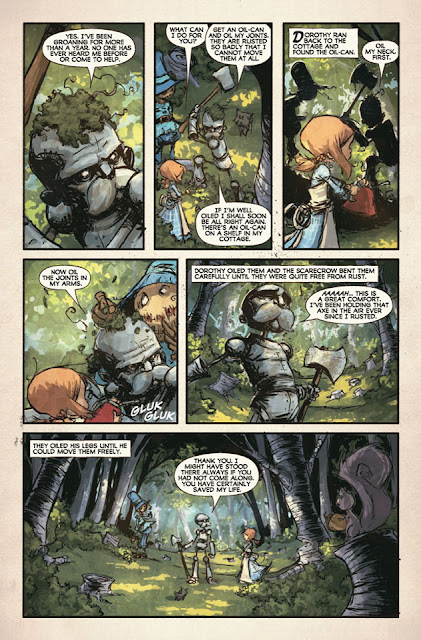 The problems with the story, from a Christian perspective are:
This second objection can be addressed if a parent reads the book along with their child, putting emphasis on the points we prefer (identifying what true courage, intellect, and compassion really are) and either noting the humanistic aspect, or simply flying over that part.

While I think this a classic worth reading for cultural literacy's sake, I would fully understand why parents might not want to read this book to their children or have them read it. Still this is an American classic and from the perspective of having a cultural awareness there is a reason to read it. Then the cautions to consider are only that some scenes might be a bit scary for the very young. I'd suggest this for 7 and up. 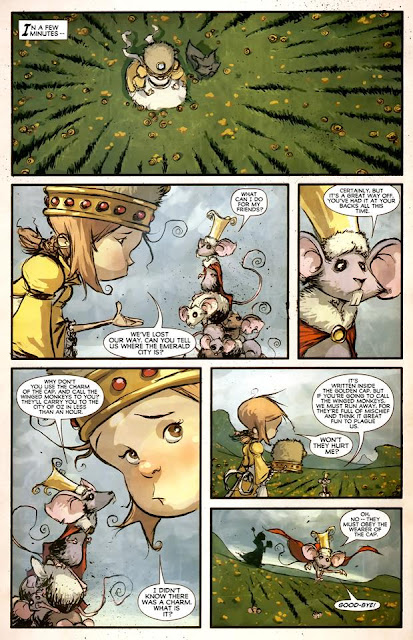 If you are going to read the story, this is a very good way to tackle it. Marvel was behind the making of this version, and they've done a brilliant job. The book is big, 7.5 by 11 inches, giving it a lot of room for big bold full color pictures. The size of the book also allows for a lot of dialogue, and gives quite a bit of the flavor of the book, while still picking up the pace some via pictures that allow for abridgment with little loss of story.

(Puffin books came out with their own adaption by Michael Cavallaro which isn't bad, but isn't nearly as good as the Marvel version. The Puffin version is black and white, smaller at just 5.5 by 8 inches, shorter at 148 pages, and there is one scene, featuring the Scarecrow taking on crows, which makes far less sense in the Puffin book – the Scarecrow suddenly has the mysteriously acquired ability to grow into a giant.)

So, if you object to the original Frank Baum novel, you shouldn't get this graphic novel version. But if you want a quicker way to work through the book, this graphic novel might well be more interesting than the novel for readers both young and old.

You can buy a copy at Amazon.com by clicking here.
Posted by Jon Dykstra at 9:00 AM