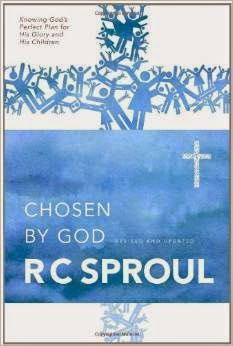 Sproul himself says that this book is a companion to his book The Holiness of God, and that anyone who loved reading The Holiness of God but not this book has misunderstood one of the two books. If Sproul is right, why are the two  so closely connected? One big reason (perhaps the reason) is that, since holy means set apart, the thing that most sets God apart is His sovereignty, His absolute control over all things, including our salvation, which has been labeled Calvinism.

While most Christians joyfully acknowledge God's sovereignty in His providence, many balk at saying that, as the back cover summarizes it, "we choose God because He has opened our eyes to see His beauty." Some are afraid to lose man's free will; others are afraid to lose our sense of responsibility for our response to God's grace; and others want God to woo us rather than compel us.

Sproul deals with all these concerns. Each of the first eight chapters of the book discusses various topics related to God's sovereignty and ends with a summary of the main ideas argued, and at least four Biblical passages for further study. Sproul begins with a look at how ideas like Calvin's did not begin with him, but reach as far back into church history as Augustine. His second chapter shows that there is no inconsistency between predestination and God's justice and mercy, and that any seeming contradiction is not a mere mystery, but can be logically understood. The third chapter deals with the relationship between "Predestination and Free Will," bringing in some helpful distinctions made clear by Augustine and the great American preacher Jonathan Edwards. All of the first three chapters contains simple tables, charts, and diagrams that help clarify the discussion.

Further chapters deal with other significant connections within the doctrine of predestination - like between "Adam's Fall and Mine," between "Rebirth and Faith," between God's "Foreknowledge and Predestination. Along the way, Sproul makes clear some problems with the catchy acronym TULIP for the five points of Calvinism. I've always taught some interesting and clearer words for some of the letters that might be misleading, but Sproul's replacement words, unlike mine, don't begin with the same letters, and so wreck the acronym. They are more accurate, though, C'est la vie. (Still - how about invincible instead of irresistible?)

The seventh chapters deals with the thorny issue of whether predestination is double, whether God predestines people both to heaven and to hell. The answer, not necessarily easy to accept but Biblical, is yes; however, as Romans 9 makes clear, no-one can complain against God's injustice, since reprobation does not condemn anyone to hell apart from their sinful rebellion, but because of it. What predestination should do is make believers humble. Hell is where we all deserve to go, but God, out of His great mercy, has chosen some for salvation.

The eighth deals with possibly the most personal of the five points, the perseverance of the saints, whether one can know, really know, that you are saved. Sproul renames this point the preservation of the saints, and hence highlights both God's sovereignty and His steadfast mercy. (And it begins with the same letter!) The comfort of this doctrine is that by looking to Christ instead of yourself, but also seeing the fruit of salvation in your life, you can grow in your assurance that it is God who has drawn you to Himself, and He will never let you go.

The final chapter deals with questions and objections and ends with Sproul again inviting us to open "our eyes to see God's beauty" in His sovereign love for His people. May our eyes be so opened.

If you believe that this book will help open your eyes to God's "perfect plan for His glory and His children," as the front cover puts it, you can order the book here.
Posted by Jeff Dykstra at 12:30 AM