On the Edge of the Dark Sea of Darkness 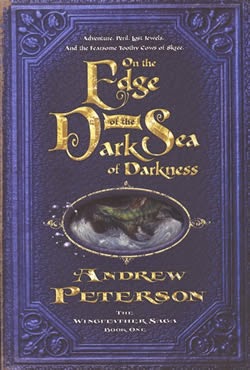 My wife hasn't read this book, but she enjoyed it too. As I made my way through I couldn't help but read whole chapters to her, or, if she wasn't nearby, the next time she came by I'd update her about the all the wackiest bits. And there are a lot of wacky bits.

The "Dark Sea of Darkness" in the title gives a clue right off as to Peterson's goofy sense of humor. The subtitle is even better: "Adventure. Peril. Lost Jewels. And the fearsome toothy cows of Skree."

While I read the first three chapters to my wife (I just couldn't help it) I'll restrain myself here, and pass along only the first few lines of the opening which is titled: "A Brief Introduction to the World of Aerwiar." Peterson wants us to know this takes place on an entirely made up world so he begins with his own creation story:


The old stories tell that when the first person work up on the first morning in the world where this tale takes place, he yawned, stretched, and said to the first thing he saw, "Well, here we are." The man's name was Dwayne, and the first thing he saw was a rock. Next to the rock, though, was a woman named Gladys, who he would learn to get along with very well. In the many ages that followed, that first sentence was taught to children and their children's children and their children's parents' cousins and so on until, quite by accident, all speaking creatures referred to the world around them as Aerwiar

That gives a good taste of the fun that is to follow.

The heroes of this epic tale are three siblings: Janner and his little brother Tink, and their littler sister Leeli. The villains are the Fangs of Dang, under the direction of the "nameless evil...whose name was Gnag the Nameless." Our story begins nine years after the Fangs sailed across the Dark Sea of Darkness and conquered the lands of Skree, and it is in a little cottage, in this conquered land, that the family Igiby resides: the three children, their mother, and their grandfather.

The Fangs are cruel, bureaucratic, and they look exactly like "...humans except for the greenish scales that covered their bodies and the lizard-like snout and the two long venomous fangs that jutted downward from their snarling mouths." Oh, and they have tails. And worst of all, they think the Igbiy's have the lost Jewels of Anniera!

Janner, Tink and Leeli don't know anything about any jewels, but they're curious sorts, and they are eager to find out all they can. So Peterson is writing not just a fantasy, but also a mystery, and certainly a comedy. And he's managed to slip in a really good chase film too.

A word of warning might be due as far as the comedy is concerned. Some of it could be described as juvenile: no potty humor, but Janner does, at one point, discover a candle made of "snot wax." Peterson peppers the book with footnotes and for the candle he has this entry:


1. Snot wax is too repulsive a thing about which to write a proper footnote.

Then there are the vile Fangs of Dang. Their name gives a good indicator of the line that Peterson draws: it leaves no doubt that they are a vile bunch, but Peterson isn't going to use vile language. And yes, the Fangs like to eat brown lettuce, maggot-loaves and anything that wriggles, but this humor is all of sort that will appeal to boys, gross out their sisters, and leave parents largely untroubled.

But what mom and dad are sure to love is the prominent place that parents have in Peterson's story. In most teen fiction parents are either dead or dumb; the teen hero is either an orphan or wishes he was.

Here we have a well-respected mother and a grandpa who is doing what he can to fill in for the sibling's long-dead father. So when Janner makes a big mistake and doesn't know what to do he is smart enough – and he loves and respects his grandpa enough – to know he should go to the old man for help.

This might be where the author's Christian faith most comes to the fore. Andrew Peterson is better known as a Christian songwriter, and while this is not a specifically Christian fantasy, the virtues lauded in this book are of the sort found in Philippians 4:8. These three siblings know they can look to their grandpa for guidance, for love, and to see what sacrificial leadership looks like.

So I'd recommend this as a very fun and positive book for fathers to read with their boys 10 and in some cases maybe even a couple year younger if they can handle battles and lizard-like villains. This is a fun one that will have both dad and son laughing, and turning pages quickly. I'm learning too, that while there are some notable distinctions between "girl books" and "boy books" if a dad really loves a book, his daughter is quite likely to love hearing him read it. So this could be a very good dad/daughter book too, maggot-loaf aside, with little Leeli gives daughters someone to cheer on too.

There are three more titles in the wild and wacky series, and for that I am very thankful! You can buy it at Amazon.com by clicking here.