The most important of topics aren't always the most interesting. That's why, instead of writing a textbook on the subject of "how government policy goes bad," James Payne decided to craft a series of four storybooks.

The heroine, Princess Navina, is the heir apparent to the throne of the Duchy of Pancratia, and her father, the king, wants her to learn how best to govern by seeing how governments are run in other countries. So in each book Princess Navina visits a different country, four in all, and in three out of four instances, her visit serves only to teach her how not to govern. These big, bad governments are scary, hurtful... and familiar. And, of course, that is the point: Payne is using Princess Navina to teach teens how in the real world many government policies, even those implemented with the best of intentions, can be oppressive and harmful. 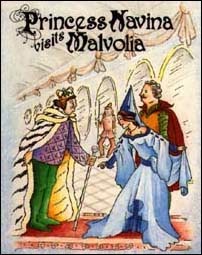 In the opening book the princess visits the country of Malvolia, where the ruling magog tells his visitors that in his country "rulers have one principle and one principle only, and that is to make everyone as unhappy as possible." The princess finds this a shocking ambition, but more shocking is the clear parallel between the magog's policies, introduced with the worst of intentions, and our own government's policies, which were passed with the best of intentions.

For example, the magog offers generous benefits to those in misery, but his intent isn't to help, but rather to sap their initiative, and to foster sloth. This in turn made the recipients surly and discontent, much to the magog's delight!

The princess also learns of the country's "prosperity fines," meant to vex the wealthy by fining them more and more the richer they become. It is, the magog crows, an excellent way to discourage "production, innovation and saving."


"The manner in which we collect the prosperity fine," he continued, "adds a further nuance of frustration. We require that each person calculate his own fine, which might not be too difficult except for one thing." He paused, his eyes brimming with sneaky delight. "Except for the fact that the rules and regulation for computing the fines are immensely complex and illogical! This means that everyone has to work long and hard to try to figure out what their fine is, always haunted by the fear of doing it incorrectly and going to jail."

In the end the kind-hearted princess can't hold back her outrage, but manages to escape from the magog, and continue on her journey. 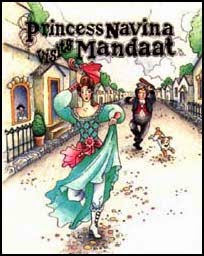 The next country on her world tour is Mandaat, where "legislation is the leading industry, and, as a result, they have a plentitude of laws." The princess's tour guide is happy to explain how their laws are crafted:


"...we weigh all our legislation here. That is how we evaluate our progress. Last year the Salon approved twenty-nine point three tons of laws, up by nearly a ton over last year...."

"Are these gentlemen able to read the law they are approving?" asked the princess. "Why that pile alone must be four feet high."

"Of course not," replied the doctor. "No human being could read so much."

"But should they understand the laws they are approving?"

"My dear, that would never do. If they waited until they knew what they were voting on, they would never get anything done."


What the author meant as satire two decades ago is too true today. In American Senate's version of the Obamacare bill topped 2,700 pages, and Democrat Nancy Pelosi's infamously declared, "...we have to pass this bill so that you can find out what is in it..." Canadian bills haven't reached quite this epic proportion, but the Harper government did craft a 452-page bill back in 2012, seven years after Stephen Harper complained that a Liberal 120-page bill was too big to evaluate as a whole.

To return to our fairy tale, the princess learns that too many laws lead to oppression. But – and this is where the author shows his naivety – the book's last lines are about whether it might be possible to have no laws, and no government at all. Yes, it might, if we were all perfect people. But, this side of Heaven, the need for some laws will always remain.

The third country on the tour is a former colony of Malvolia. In Nueva Malvolia the leaders are still intent on causing citizens as much misery as possible, but instead of a dictator, they have a "paterog" chosen by a democratic election. That means as the paterog sets out to harm his constituents he has to make it look like he is trying help them. As the paterog explains to the princess, "...when I meddle I don't say my goal is to destroy the idealism of creative people. I tell them that I intervene in the name of some good cause." 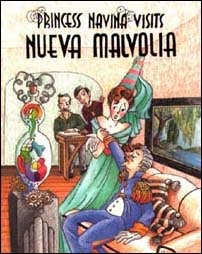 So how does this look, in action? The paterog points to his country's National Symphony as his best example.


"Its beautiful music made people happy, and it gave joy to the musicians to accomplish the highest form of their art.... To ruin the orchestra, I passed a regulation that it had to hire small people for its musicians. Naturally, this meant that some inferior musicians had to be hired, morale went down, the music master resigned in protest, morale went down further, and finally.... hopeless, doleful mediocrity!"

And because he did it in the name of "helping short people achieve great opportunities" his meddling actually improved his popularity.

More examples are given. The paterog explains how he destroyed a "boy's club in one brilliant stroke." The group helped troubled youngsters, so of course the paterog had to put a stop to its work.


"So I passed a law requiring all boys clubs to admit girls, saying that it was unfair to exclude girls from such a successful program. It worked beautifully! The volunteer who founded and directed the club resigned in anger, most of the boys didn't want to change the name, so they dropped out, and no girls could be persuaded to join anyway. So the club is totally wrecked!"

Princess Navina soon tires of Nueva Malvolia, and makes plans to leave. But one of her party, he uncle the baron refuses to go, because he has been captivated by an entertainment device called the occurama: "a great glass globe" which contains a mass of colored liquid that moves and heaves. The patertog has long been in search of something to deaden minds and "draw them into wasteful activity" and the result of all his research is the invention of this occurama. James Payne was a member of the "Sandpoint Committee on Television Awareness" so its clear his target here is TV, but it the moral of this small party of the story seems like it could just as easily apply to Facebook, or the many time-consuming, mind-numbing computer games we all play.

The princess is only able to separate the baron from his occurama when she gets her whole party forcibly ejected from the country for the crime of helping clear litter from the streets. (A clean town makes people happy, and that the paterog can't stand!)

Princess Navina's fourth and last visit is to Voluntaria, a country where there is no government or laws, and everything is wonderful. Voluntary associations do the work of building bridges and road, and caring for the poor, so no taxes are needed (people simply donate to what needs to be done). Even their police force and judicial system are voluntary associations. And they have so few laws that when one of the princess's party asks about their lawyers, they are confused, because they've never heard the word "lawyer" before.

That is quite a dream to share, but it is not a realistic one. While it's true that many of the roles our government has adopted (welfare, healthcare, retirement saving, unemployment insurance) could be, and once were, done by volunteers like churches, there will always remains a need for some government.

The author is libertarian, rather than Christian, which accounts for the series' strength and weaknesses. In the first three books Payne's fun fairytale-style of storytelling is put to great use in exposing the oppressive nature of our big governments.

But in the fourth, where he outlines his own idea of what the very best sort of government would look like, his libertarian understanding of Man's nature shows itself to be idealistic and unrealistic. The problem is that in revering the individual, libertarians – at least those who are not Christian – naively assume that Man is able to govern himself, and there is no need for the government to have a role in restraining our sinful nature. It is no coincidence that the type of government Princess Navina meets in her fourth adventure – where all government roles have been are been performed by voluntary associations – has no parallel anywhere on Earth. Would that it could be so, but this side of Heaven man is simply not good enough to go without any government.

So the fourth book is a rather unsatisfactory conclusion to the series, but the first three are fun, instructive, and thought-provoking. They could be put to great use by parents or teachers trying to explain economics and government policy to teen students. Some parental or teacher guidance will be needed, to help students see the real-world parallels, and to talk through the lessons that Princess Navina is learning: less government is a must, but it it needs to be pointed out that James Payne's no-government-at-all proposal is not a workable alternative. So buy the first three, skip the last, and use them with your teens to start some great conversations about how "more government involvement" is not a good answer to most problems.

They can be purchased for $10 each, plus $3 shipping at www.lyttonpublishing.com/order.html.
Posted by Jon Dykstra at 12:30 AM