Tales from the Perilous Realm 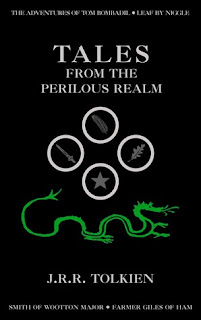 J. R. R. Tolkien’s Tales from the Perilous Realm show another side of his amazing creative power. As a father, Tolkien created stories for his children of another realm beyond Middle Earth, and yet not entirely beyond life as we know it. Why is this other realm so “perilous”? Because it reflects the mystery of life – of love, loss, pride, purgatory, and faerie.
That’s right – purgatory. Tolkien, a Catholic, promoted some “perilous” ideas in his tales that mature Reformed readers will have no trouble rejecting, like a farmer defying his king or a painter atoning for his own sins, but behind those ideas are some sound insights into human nature (see Jeremiah 17:9) and God’s grace (see 1 Corinthians 3:10-16).

The first story, "Roverandom," was Tolkien's gift to console one of his sons on the loss of his toy dog - which in the story is a real dog that has become a toy dog through a cranky sorceror's spell, and goes through the kinds of adventures that a new toy dog might be expected to have in a world in which the moon and the Western Isles are equally (un)attainable destinations for the average person. A great tale to read aloud to kids with their own stuffed animals.

The defiant "Farmer Giles of Ham" is not a humble hero, but he is given the opportunity to humble others even more arrogant than himself (including a miller, a dragon, and a king) in Tolkien's glimpse into vanity both petty and grandiose. The story itself mocks the vanity of academic editors as well.

Only two of the sixteen poems in "The Adventures of Tom Bombadil" are actually about possibly the most intriguing character in The Lord of the Rings. The poems, either written or collected by Bilbo, Frodo, and Sam - the hobbits who most loved (and eventually missed) the magical glamour of the elves - show that any kind of faerie spell (including love) can be both enchanting and dangerous. (Blessings can become idols.)

"Smith of Wooton Major" can be seen as a comment on the need for childlike faith, as only those who are given the ability to see - and explore - the realm of faerie can get beyond the cynicism of being too sensible to believe in such seeming nonsense.

Finally, "Leaf by Niggle," though it allegorically depicts purgatory, also shows the importance of others, and the service of others, in the communion of saints. That annoying brother or sister in the congregation may actually be just what the aspiring artist needs to anchor his work in the real world.

For the devoted Tolkien fan, there are also new looks at Tolkien’s home life in the introduction and Tolkien’s famous essay “On Fairy-stories,” showing the value of such stories and the inspiration(s) for them.

So, although there are some pitfall in the path Tolkien treads in his Tales, the Perilous Realm is still well worth exploring for the discerning reader.
Posted by Jeff Dykstra at 12:30 AM