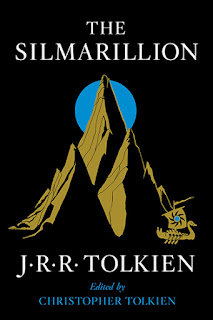 No, I`m not going to tell you why it is called The Silmarillion... not yet!

That story is only one of the tales in The Silmarillion, but it was clearly one that meant much to Tolkien himself, since he had the names of Beren and Luthien inscribed on the gravestones of himself and his wife respectively. Beren is one of only three mortal men who married elves; another, of course, is Aragorn himself. (The third? Read The Silmarillion to find out!) The story tells of a love that, like the love extolled in the Song of Solomon, is stronger than death. Beren`s love for Tinuviel is so strong that it braves the stronghold of the most Satanic figure in all of Tolkien`s worlds. (Sauron? No, the one before him! See next paragraph.)

Which brings us to the value of  The Silmarillion for a Christian reader. When Tolkien conceived of Middle Earth, part of his purpose was to give England an alternate mythology parallelling the history of our own world, as God's word. Therefore, this book tells of the creation of Middle Earth by Illuvatar; the fall of Morgoth, his chief servant; and all the epic conflicts that arose from the struggle between Illuvatar and Morgoth (including epic wars and a massive flood).

Tolkien`s version of the creation has its own beauty that may remind some readers of the way Aslan sang Narnia into being in C. S. Lewis`s The Magician`s Nephew. Similarly, the fall of Morgoth shows metaphorically how sin brings discord into the world. All the struggles of elves, dwarves, and men that result show the nobility of love and heroic sacrifice and the ugliness of pride, treachery, and betrayal. Many of the verses in Proverbs that show the importance of patience and self-control are well illustrated in Beren and Luthien's tale and other stories of the various races' correctly and incorrectly motivated wars against Morgoth and others of Illuvatar's servants (the Valar). Parallelling the Genesis Flood, the anger of the Valar toward the ingratitude and mistrust of men and willingness to follow Sauron's demonic guidance brings on a huge flood - the drowning of Numenor - and a permanent change in the form of Middle Earth.

Of course, we do not find the specifically redemptive sacrifice(s) of The Lord of the Rings in The Silmarillion, but the willingness to risk one`s life for others repeatedly brings former enemies together (think of the parable of the Good Samaritan and the actions of David toward Saul), and the events that lead up to the reign of Sauron and the making of the One Ring are also detailed.

All very interesting, you might say, but why read a reflection of Biblical truth and not just stick to reading the Bible? Certainly the willingness to read and reread our Bibles, to study the Word, to let it dwell in us richly, is a mark of true faith. However, Christians also want to see that truth reflected in art, in music, and in literature - even in fiction. Even the Puritan John Bunyan saw that, which is why we have Pilgrim's Progress. The beauty of fiction is that it may recapture for us the 'strangeness,' the wonder of Biblical history to which we have become too accustomed:
Yes, this is how ugly sin is, how beautiful virtue is, how great and terrible judgment is. You mean that judgment on pride and blasphemy and wickedness would bring a permanent change in the world? Yes, it did, and yes, it will!

So why is this book called The Silmarillion? Well, because of the Silmarils, jewels crafted by Feanor, an ancient elf whose sons' great oath brought many years of conflict to Middle Earth. Why the Silmarils are so important to elves, men and the Valar, you`ll need to read the book to find out.
Posted by Jeff Dykstra at 6:00 AM