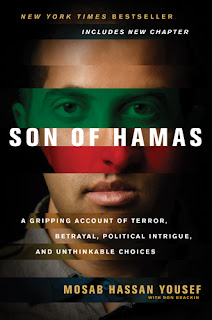 It’s an autobiography that has the makings of a great spy novel. The central “character,” Mosab Hassan Yousef, is a double agent, the son of a terrorist leader but also in the employ of the Israeli secret police. When, with his help, one terrorist after another is arrested, he knows that for his own safety the Israelis will have to arrest him too – it would be too suspicious if he was left to roam free. So off he goes, at his own initiative, to the harsh Israeli prison camps. And to complicate matters further, this life-long Muslim has started wondering if Jesus Christ might be the Son of God.

Maybe it’s a mistake to compare this to a spy novel – it makes it sound trivial. It is a page-turner, but the reason you should read this book is because it offers an education. If you want to learn how the Israeli/Palestinian conflict started, and understand the motivation of the two sides, there is no better source. What makes Yousef the source? Well, first the fact that his father was one of the founders of Hamas, a Muslim group that is both a Palestinian terrorist organization and the democratically-elected ruling party in the Palestinian Parliament. (That a group can blow up women and children, and still win a popular vote illustrates just how messed up the Middle-East remains.) Yousef grew up in that world, wanting to kill Jews. As an adult, however, Yousef ending up working secretly with Israelis to save Jewish lives by foiling Hamas plans. So Yousef can explain both sides because he has been on both sides.

What also makes this volume unusual is that it doesn’t play favorites. Yes, Yousef clearly empathizes with the Israelis – he understands they are fighting for their lives against an enemy that doesn’t want peace, but only their death – but he begins the book with an account of how Israeli soldiers brutally beat him. Both sides end up looking bad before Yousef finishes telling his story.

Now if spy novels, or Middle East history textbooks are not really your thing, there is still another good reason to pick up this book: it is a beautiful testament to God’s grace and persistence. Yousef was once a hateful man, a worshipper of a false god who went out to buy guns he could use to kill Jews. But God pursued him, and He changed him, and He saved him. Wow!

You can pick up a copy at Amazon.com by clicking here.

A 2014 documentary on Mosab Hassan Yousef called The Green Prince