The Meaning and Mode of Baptism 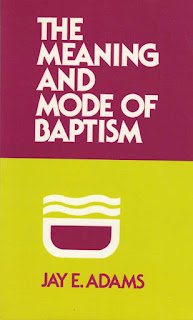 Immersion or Sprinkling? And does it really matter?

The answer Jay Adams gives to the second question is an emphatic yes, first because baptism itself matters – it is one of only two sacraments God gave us – and second, because, as a sacrament, baptism is symbolic, and the mode by which it is performed is part of the symbolism. So if baptism should be done by immersion, then we would see in the descent into the water and emerging from it, our sharing in Christ’s burial and resurrection. But if sprinkling is the proper mode, then we would see something very different being symbolized: the descent of the Holy Spirit upon us, and His purification of our lives.

The rest of this 56-page booklet is spent answering the first question. Adams defends the traditional Reformed practice of baptism by sprinkling and argues that not only is this permissible, it is the only proper way to do baptism. He makes his case by showing the link between baptism and Old Testament purifications, which were done via sprinkling. He also dissects the texts used by immersionists to make their case, and shows how these texts actually assume sprinkling, rather than immersion.

Best studied with an open Bible at hand, this tiny tome requires, but also rewards a reader’s effort.

Email ThisBlogThis!Share to TwitterShare to FacebookShare to Pinterest
Labels: baptism, books you can read in an evening or two, Christian non-fiction, Jay Adams