Thirty-Eighy Lessons on How to Recognize Bad Reasoning 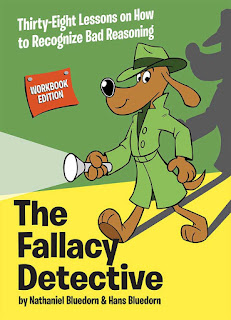 by Nathaniel and Hans Bluedorn

Two young fellows, brothers Nathaniel and Hans Bluedorn wrote this book as a course in logic for the Christian home-schooling adherents. Why? Let them tell you:

“We see a need for Christians to strive for a higher standard of reasoning. We believe God wants his people to become aware of their lack of discernment, and logic is an important part of the science of discernment. For instance, many Christians adopt beliefs and practice without properly evaluating the arguments which are used to support them. We need to rediscover the way of the Bereans, who searched the Scriptures daily to see if the apostles’ teachings were true (Acts 17:10-11).

“As we grow older, we become more aware of how poor many people’s reasoning is. But we also need to realize how poor our own reasoning is. This is a humbling thought, and with it we embark on a journey towards higher standards of reasoning. We will never be as logical as the Lord Jesus Christ was, but we must work at it.

“Besides just learning logic, we also see a need for a truly Christian logic. We want to take logic back from the unbelievers. Our challenge is to define good reasoning in a truly biblical way. Logic was not invented by a pagan philosopher named Aristotle. Logic is the science of thinking the way God thinks (more correctly, the way God wants us to think) – the way Jesus taught us to think…”

This book is for all Christians… It is important that we learn our reasoning skills from a genuinely Christian worldview.

This book focuses on practical logic… It teaches you to recognize the everyday fallacies you are confronted with in your work, in the newspaper, in advertisements, in listening to politicians, and also in our discussions with brothers and sisters in Christ.

This book is self teaching. It is written in an easy-to-read style that reminds me a bit of the best of the for Dummies books, but I can assure you, you’ll learn a lot and enjoy it while doing so.

Supposedly this book was written for children and parents to use together, and there is no doubt that it could be an effective teaching tool that way. But it is much more than that. The first few lessons are easy enough and might lull you into thinking the book is just for children, but as you progress, you’ll enjoy the challenges of recognizing and refuting many more difficult fallacies. So the book is truly for all ages.

Most of the lessons deal with a single fallacy, give an example or two, and end with varied exercises that sharpen your thinking processes so that you can solve them as they become progressively more difficult.

The fallacies covered include many that are readily recognized by most of us, such as loaded questions, red herrings, weak analogies, and generalizations. But many are new to almost all of us. How many times haven’t you listened to a speech or read a newspaper article and thought to yourself, “there’s something wrong with that scenario, but I just can’t put my finger on it.” Learning to recognize a fallacy is also the beginning of being able to respond to it.

In short, I heartily recommend this book on the Christian view of logic. It is suitable for anyone from teens to senior citizens; all that it requires is a desire to learn practical logic skills. It would also be a valuable addition to the curriculum of our Christian schools.
Posted by Jon Dykstra at 6:00 AM