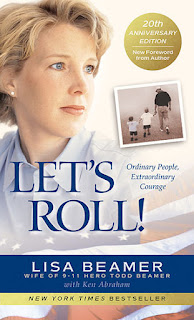 On a scale of ten, I rate most of this book as a twelve. So what is this book about, and what makes it special?

The blurb on the book’s cover gives you a hint: “9-11. You read all about it. You heard American hero Todd Beamer’s last words. But is that the end of the story? In Let’s Roll! Todd’s wife, Lisa reveals what really happened on that ill-fated flight, as well as poignant glimpses of a genuine hero. She talks candidly about Todd’s growing-up years, their marriage and last week together, and then family moments without him…and how she found the confidence to go on in the face of such tragedy and loss.”

It’s a moving book as it tells us about Lisa Beamer who as a 15-year-old wanted to know why God snatched away her father in the prime of his life, and about the same Lisa who as a young mother finds the strength to go on after the loss of her husband.

It’s a powerful book that tells how she finds that strength in God’s promises: “For I know the plans I have for you,” declares the Lord, “plans to prosper you and not to harm you, plans to give you hope and a future” (Jeremiah 29:1). As a 15-year-old she had come to understand the plans God has do not just include “good things” but the whole array of human events. The prospering God speaks of is often the outcome of a “bad” event. Like Joseph’s brothers heard in Egypt “You meant it for evil, but God meant it for good, that many people may be saved.”

It is a Christian book about a Lisa who as a seven-year-old committed her life to Jesus, not knowing what “that decision meant until later.” She writes that her realization evolved naturally as she grew up, without any “crises experience or a dramatic turnaround.” She didn’t need a special calling to be what God wanted her to be.

In trust and obedience, this mom, this unpretentious housewife, spoke wondrously on every major network, repeatedly, not of her own strength, but of “the hope that comes from knowing who is in control. Hope comes from knowing that we have a sovereign, loving God who is in control of every event of our lives.” And so this magnificent book is not really about Todd or Lisa – it is about the Almighty who strengthened her for such a time as this.

If I had to pick my ten favorite books, it would be tough because our family library has some 3000 books, but Let’s Roll! is definitely one of them. It starts a bit slow with Todd’s growing-up-years, but read on: it’s one of those rare books you’ll remember for years to come!
Posted by Jon Dykstra at 12:38 PM