How the News Makes Us Dumb 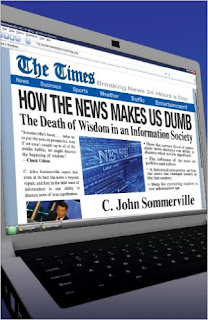 No, you’re not paranoid, the media really is out to get Christians. In his book “How the News Makes Us Dumb C. John Sommerville argues that news by its very nature is incapable of portraying Christians (or any conservatives) positively. He also insists that watching daily news is bad for our brains. Many of these types of media-critiquing books spend time outlining solutions to the problems they present, but Sommerville skips that part. He thinks the news media is beyond repair. Instead of reading the newspaper he wants people to stay informed by reading books.

But how could reading the news make us dumb? The news is filled with important events from around the world. Shouldn’t we know stuff like that? Sommerville starts out his book by making the point, “Important people don’t like to be in the news.” The people out there actually getting things done don’t have time to deal with the press. Celebrities on the other hand, love to be covered, and so they are. Instead of leaders of industry we hear all about TV and movie stars. We might watch the news to keep abreast of important issues, but all too often we hear celebrity gossip instead. Our brains grow fat and flabby hearing about Jessica Simpson’s new boyfriend or the Rolling Stones’ latest gig.

Our daily dose of news is also time consuming. Many of us feel compelled to read or watch the news daily but we don’t feel the same compulsion for daily study in other fields like science, history, or sometimes even religion! How many people spend as much time on their Bible study as their study of the news?

The daily nature of news also undermines its importance. News doesn’t occur regularly; it occurs in erratic spurts. Still, reporters have to provide news on a daily or even hourly basis, even if nothing is happening. Busy news day or not, a paper will still have to be delivered the next day, and the evening news will still have to last a full hour.

So a story that was too insignificant to broadcast one day can suddenly become the lead story on a slow day.

You’ll never hear life’s big questions, the really important ones, answered on the news. Why are we all here? What does it all mean? The important questions in life are simply beyond the 20-second sound bites, and 400 word news reports

Focus on Change is Anti-Christian

Of course, if the media ever did answer the big questions they would put themselves out of work. Why would anyone tune in the next day? And so instead of focussing on important matters, the media focuses on change. It’s this focus on change that makes the media unavoidably anti-Christian. Churches that have held steadfastly to the word of God, and haven’t changed, don’t appear anywhere in our news. The churches making radical changes – ordaining homosexual priests, worshipping with other religions – these churches can even make the headlines.

Of course, this bias isn’t aimed specifically at the churches. It is actually a broader anti-conservative bias. Conservatives, by their very nature want to conserve, and preserve things the way they are. Conservatives don’t like change. By focusing on change the media has turned itself into an anti-conservative organization. This is one of the reasons why Sommerville thinks the media is beyond repair.

Point is to Entertain, Not Inform

Many news broadcasts end with a feel-good story about some lost puppy finding their way home, or maybe a story about a panda birth at the zoo. We all recognize the entertainment nature of this type of news, but do we recognize that even hard news has the same entertainment focus? Just think about how the media reports scandals. Day after day we hear just a little bit more, but we never hear it all. Sommerville calls it news as a “striptease.” He notes that, “the last thing news people want to do is end a good story….The longer it takes the more news gets sold.” And when there is nothing new to report, the investigation itself often becomes the story. Sommerville blames us for this type of feeding frenzy mentality. He says if we really just wanted the truth we would wait for the investigation to conclude and then read a book about it.

Why a book? Because a book has the space to provide the depth that the news media misses. The daily nature of media means they can’t offer real analysis because they don’t have the time. Sommerville offers a number of contrasting headlines throughout his book to make this point:

Which of these papers got it right? If you’re relying only or primarily on these papers to keep you informed, then you’re obviously in trouble.

The need for speed also leads to the use of shorter words in headlines. Sommerville uses the example of the word “cut” (as in “Budget Cut”) in his book. It’s a short word, and it gets the reader’s attention but it doesn’t always mean what the reader thinks. Some cuts are merely lower than average increases (and this is particularly true in any story you read about education budget "cuts"). These short words add to the ambiguity in newspapers and “cut” down on the actual information we receive.

Harm the News Does

All these problems undermine the informative nature of news, but can watching the news actually harm us?

Well, we’ve already seen how the media’s focus on change promotes anti-Christian ideals. The same holds true when the media pretends to be unbiased. When one person emphatically states the economy is going up, you can be sure the media will find someone to state the opposite. Now if the media was truly unbiased it would seek the truth, but instead it merely seeks disagreement. Obviously only one of these two economic experts can be right, but by showing both sides the media makes it seem as if all viewpoints are equally valid, and that there is no absolute truth. This again is in direct opposition to our Christian worldview.
The news media also hurt our governments. While the media likes to promote itself as a watchdog carefully monitoring the government for us, the truth is quite different. An effective government that goes about its business and doesn’t change too much, and doesn’t hand out much money will never make the news…until they mess up something. Then they’ll make the news but for all the wrong reasons. Voters will hear about the scandal, but they won’t know anything about all the quiet good the government has done in the past.

To counter this negative publicity the government will become more inclined to change things and start handing out money. And if they hand out enough money, and pass enough laws, maybe the public will forget about the scandal.

And so the media, by their very nature, encourage big interfering governments.

When I started reading Sommerville’s book I was also reading four newspapers a day. The four newspapers didn’t leave me with much time to read anything else so it took me almost three weeks to read the first half of the book. At the halfway mark I cut down to only one paper a day and managed to finish the book in another couple of days.

I’m still a news addict, so each day I still hit more news websites than I probably need to, but because I have cut down my overall news intake I have found more time to read better material. Sommerville’s book also forced me to evaluate the news I do read in a much more critical light. I would recommend this book as a must read for anyone addicted to their daily dose of news.
Posted by Jon Dykstra at 6:00 AM