On Asking God Why 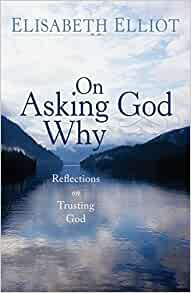 And Other Reflections on Trusting God in a Twisted World

Elizabeth Elliot knew why we want to ask God why, from experience, but what makes this collection of essays so valuable is that she also knew why we should ask God why. Elliot is also the author of Through Gates of Splendour (reviewed in this blog last month), a book which reveals how, already in early adulthood, she began to ask God why He brought her into situations that deeply tested her faith in Him.

Christian authors are often described as inspiring, but a better word for Elliot's work would be bracing, like the splash of cold water on your face that wakes you up in the morning. She never promises false hope or easy solutions. Instead, knowing from her own hard life how much our suffering can shake us, or even shake our faith in God, she points us to Christ and the way of suffering He trod to save us. Confronting numerous issues, such as divorce, abortion, women's place in the home, and courtship, Elliot calls us to be willing to suffer ourselves as part of our path to spiritual maturity.

Jordan Peterson tells us that if we want to solve the problems of the world, we should start by making our bed. Similarly, Elliot tells us that we need to grow up, but unlike Peterson, she knows that growing up means trusting more in our Father in heaven than ourselves.

Some minor cautions (along with my assessment of why they are not as serious as they might seem):

Other than that, Elliot admirably brings the type of Christian common sense that C.S. Lewis was known for into contact with her own daily life - even taking us back, years later, with the benefit of insight and Christian maturity, to the scenes of some of the most difficult parts of her life.

If you want to see how to ask God why for all the right reasons, you can get Elliot's book here, and here in Canada.