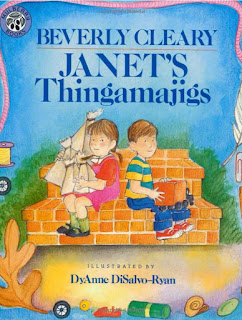 While I thought this book made a good case for the beneficial application of spankings – both of these kids could have used one! – my Grade Oner thought this was a really good read. So here is her book report.

Thingamajigs was a word that Janet's Mother always used when she was excited or in a hurry. When Jimmy, Janet's twin brother skinned his knee, Mother would always say "Where are the thingamajigs? What happened to the thingamajigs?"

Janet wanted to know what she meant so she found things like a red paper clip, a little wheel, and a shiny bead. She would ask her Mother, "Are these thingamajigs?" And her Mother would say, "Those could be thingamajigs."

I liked this book because I just like the word thingamajigs. Janet is a really fun character because she is a little bit silly. I also think that Janet is very creative. I like that Jimmy just doesn't give up about taking Janet's thingamajigs.

This is a good book. You should read it!