Time will run back 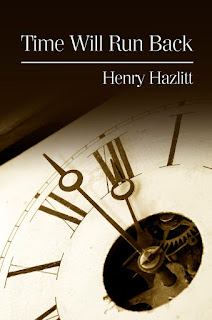 As novels go, this is intriguing. As economics textbooks go it is downright amazing.

In Time Will Run Back author Henry Hazlitt envisions a future in which the communists won and have been in power for more than 100 years. As Henry Hazlitt himself acknowledges, his novel bears some similarities to 1984 (published two years earlier) since both take place in a dystopian future in which the government manages every aspect of citizens' lives. But Hazlitt didn't read 1984 until after he had finished the first draft of his own book, so no plagiarism was involved. Instead, as Hazlitt puts it, authors like Orwell, Aldous Huxley (and his Brave New World) and himself were:


plagiarizing from the actual nightmare created by Lenin, Hitler and Stalin....All the writers had done was to add a few logical extensions not yet generally foreseen.

In Hazlitt's envisioned future the government has not only taken over the capitalist West, but they've wiped away any memory of capitalism, even editing Karl Marx's books so that no one could deduce from them what sort of economic system it was that Marx was writing against.

Into this setting Hazlitt places the ultimate outsider. The world dictator's son, Peter Uldanov, has grown up far away from his father, isolated on a Bahama island. When his mother and father split, he agreed to let her take Peter, so long as she agreed not to teach Peter anything about history, politics or economics. So when the world dictator calls his now adult son to Moscow and informs Peter that he is to succeed his father as dictator, father first has to bring son up to speed in these three key areas.

Peter's education takes up the first third of the book, though there is some palace-intrigue as well: the second-ranking member of the ruling Politburo is eager to see Peter dead, but doesn't want to be caught doing the deed.

This first third bears more than a passing resemblance to C.S. Lewis' The Screwtape Letters, with Peter's teacher filling the role of the elder Screwtape explaining to his younger devilish charge why they do things the way they do them. For example, at one point Politburo member Adams and Orlov, the editor of the world's state-approved and only remaining newspaper, explain to Peter how what is carried in the paper has nothing to do with the truth, but instead has to do with what is useful for the masses to hear. It turns out "what is useful" can be hard to determine.

"These decisions are sometimes very difficult," Adams put in. "We often find that a zigzag course is best. For example, if goods are shoddy and fall apart, or if too many size nine shoes are made and not enough size eight, or if people cannot get enough to eat, there may be grumbling and complaints – or silent dissatisfaction. We must make sure that this unrest does not turn against the regime itself."

"Therefore," said Orlov, "we must lead the complaints. We must ourselves pick scapegoats to denounce and punish."

In the middle third of the novel Peter takes on the role of the ultimate benevolent dictator. He wants to help his citizens, so he tries desperately to figure out ways to make socialism work. He has the help of his country's greatest minds, and near absolute power, so he is in the best sort of situation to make it work. But try as he might, they can't make it work.

The biggest trouble Peter keeps running into is trying to figure out the value of what they are making. They have no money (since no one buys anything, but is instead given what they need) so they can't use price to calculate how valuable one product might be compared to another. And if they can't calculate value, then they also can't determine if the country is producing more overall this year vs. the last. Sheer tonnage is one proposed measure – that could use that to compare how much grain they grew from one year to the next. But even this falls short, because grain can come in different qualities. How then should they evaluate things if one year more grain is produced but of a lower quality, and in another year there is less but of a higher quality? Which was the better year?

After ruling out tonnage as a helpful means of measuring output, one alternative after another is proposed only to have the shortcomings of each then exposed. The alert reader will see where this is leading: what this socialistic  economy lacks are markets in which the value of a product is assessed by consumers as a whole.

In the final third of the book Peter gets more desperate and more radical in his efforts to make real improvements and give citizens real freedom, and he ends up discovering some economic principles that really help: open competition, property ownership, and the rigorous prosecution of cheats and swindlers. To help his citizens he is forced to invent capitalism!

Though the book is most obviously about communism, the warning Hazlitt offers here - that freedom and prosperity cannot co-exist with an economic system that prioritizes equality of distribution – is directly applicable to communism's democratic twin, socialism.

This book sat on my shelf unread for many years because I didn't believe a world-renown economist could also be a credible novelist. I was wrong. There is a conversation here and there that gets bogged down by the economic lesson Hazlitt is trying to teach, but overall this is not just readable, but engaging and entertaining, able to stand up to comparisons with 1984 and Brave New World, which themselves are not read for their wonderful prose, but rather for their insightful investigations of human nature in the face of tyranny. So this is a readable, intriguing and important novel with a few slow bits. And as an economics textbook, there is none better – Hazlitt makes a strong and compelling case for the free market.

The e-book can be had for free here. Or you can buy a paperback copy at Amazon.com here and Amazon.ca here.

Though 1984 and Brave New World are important books, they both have sexual content (Brave New World more so) that make them problematic to discuss even in the high school setting.

Sex is also discussed in Time Will Run Back but in a way that parents and teachers may find more palatable: brief mention is made of how the government manages even citizens' sex lives, mandating that no one can pair up for longer than a month, lest they form familial bonds that compete with the bonds they should have to the state. But this is sex at is most boring - nothing titilating here.

I believe you'll find find Hazlitt's offering a worthy substitution for either of these other two - just as engaging, as insightful, as thought provoking, and without the sexual content.
Posted by Jon Dykstra at 9:00 AM