Urchin of the Riding Stars 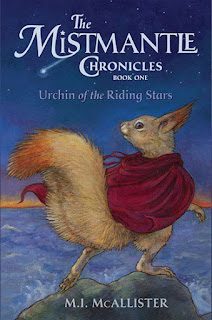 
This was so good I had to share bits of it with my wife. This is an animals-with-swords tale, the hedgehogs, otters, moles, and squirrels all living together in the same island kingdom under the good King Brushen.

But all is not well in the kingdom of Mistmantle – there are "cullings" being done to the newborn handicapped children. This is quite the somber subject for a children's book, and as the culling are considered for the elderly too, it's clear that the author is speaking to both abortion and euthanasia.

The young Urchin is very much opposed, but his heroes, Captains Crispin and Padra, don't seem to be doing anything to stop it, and the third captain, Husk, seems to be enjoying it! So who are the good guys then? Who can Urchin turn to for help to save these children? It turns out some of the good guys are indeed good, but, on the other hand, some turn out to be really, really bad.

This a fairytale that takes seriously the Chesterton quote about dragons:

There is evil in this book, and the might even turn off some of its target preteen to early teen audience. But it gets to be quite the rollicking adventure soon enough, full of courtly intrigue, conspiracies, and heroes being heroic.

I think the author is Christian, and the God of this story is referred to as "the Heart." This spiritual element isn't huge, but it is persistent and doesn't stray into anything weird or wacky. I know this will be a book I'll enjoy reading to my kids. An otherwise entertaining second book in this Mistmantle Chronicles series is marred by an agenda-pushing, albeit passing, mention of a female priest. The first book stands well enough on its own, so in our house I think we're going to start and stop with number one.