The Misadventured Summer of Tumbleweed Thompson 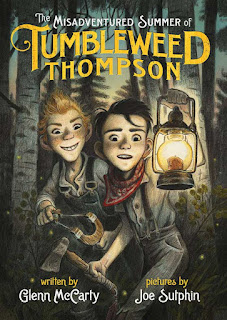 I’m sure I’m not the first reviewer to describe Misadventured as Mark Twain-esque. This is a tale of two very different boys, living out frontier life in 1876, and equally matched as both friends and rivals. Tumbleweed Thompson is a shyster and the son of a shyster, blowing into Rattlesnake Junction as father and son peddle miracle medicine from the back of their wagon.

Eugene Appleton, a good son of the town’s pastor, is in the audience, watching as the peddlers are shown up and run out. But when Tumbleweed reappears on his ownsome, he pulls Eugene into a whole summer’s worth of getting chased by smugglers, trailing train robbers, and trying to outdo each other for the attentions of the mayor’s daughter, Charlotte Scoggins, a misadventurous lass herself.

It’s evident the author is Christian, though that might not be apparent to the 10–14-year-old audience this is intended for because, even as Eugene means well, he doesn’t always act well (and Tumbleweed often enough doesn’t even mean well). That would be the big caution then, not to give this to boys who are struggling with telling right from wrong themselves. That does mostly get sorted out at story's end, when both boys do the very best thing, acting in defense of a widow and a man falsely accused.