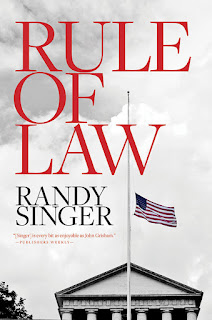 
Rule of Law is a legal thriller, but the story begins outside the courtroom, with a SEAL team storming an Arabic jail to free an imprisoned American journalist. When that mission takes a tragic turn, the fallout ends up in front of the Supreme Court.

Author Randy Singer uses his fictional story to examine the real-world way in which the US government, and particularly the executive branch, has been acting as judge, jury, and executioner in placing foreign nationals on a “kill list,” and then taking them out, and those near them, via drone strikes. Singer doesn’t seem to be arguing against all drone strikes. But the title he has chosen certainly references the idea that we all need and benefit from accountability, so we all – including even the president – need to be under the law. Our leaders must not act like they are above it, as dictators do.

This is well written, with a great balance of action, some romance, unexpected courtroom twists, and some realistic, subtly woven in, wrestlings with God. Singer is rapidly becoming a favorite author.