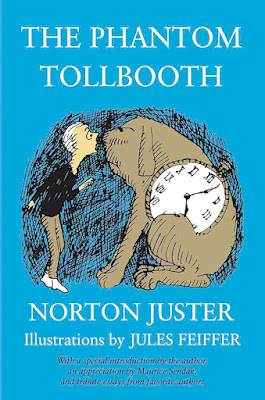 
What kind of book is suitable for study in the Fifth Grade, and in First-Year university English too? It's got to be some kind of weird and wacky wonder to pull that off!

The Phantom Tollbooth is a classic, old enough to have been around when I was a kid. It's also famous, so I may have seen it displayed prominently in the kids' section at the local library, but back then I would have been put off by the title – I wasn't into ghost books. I've seen it many times since, but only got past the title when I noticed it among the offerings at the Westminster Theological Seminary bookstore. They're not really about fiction (or ghost stories) so I had to give this a closer look.

It turned out the title tollbooth was a phantom only in the sense that it mysteriously appears in the boy Milo's bedroom. For those that might not have run across them – there don't seem to be many of them anymore – a tollbooth is a small building, usually large enough to fit just one person, where people pay to make use of a bridge or road. The author says of Milo "Nothing really interested him – least of all the things that should have” but even his curiosity is piqued to want to test this out. He drives up in his electric toy car, deposits some coins, and suddenly finds himself outside his room, driving rapidly down a road.

Among the first people he meets is a watchdog that can talk. And, more importantly, he can tick – Tock is part dog and part pocketwatch! The dog demands to know what Milo is up to.

"KILLING TIME!" roared the dog – so furiously that his alarm went off. "It's bad enough wasting time, without killing it." And he shuddered at the thought.

Milo soon learns he is in the Kingdom of Wisdom, a land divided after the old King died. His two sons have set up two cities – Dictionopolis and Digitopolis – with one devoted to words, and the other to numbers. The only thing the two sons could agree on was to banish their two sisters, the princesses Rhyme and Reason, and as you might expect, where neither Rhyme nor Reason can be found, craziness abounds.

I was almost a quarter of the way in before I started to get a feel for what sort of book this was. There's some Alice in Wonderland here, with Milo meeting odd sorts speaking confusing but clever things, in a country beyond normal maps. There might be a bit of Pilgrim's Progress too, with Milo learning his lessons by first treading down some wrong paths, and then meeting personifications of troubles he has to contend with. It's not a Christian book, but it is trying to teach a moral – Milo is here to learn that he has lots to learn, and that life is only boring to those too lazy to start exploring.

While there aren't any ghosts, parental eyebrows will be raised when the demons make their appearance. But they aren't that sort of demon. They live in the Land of Ignorance, and have names like Gross Exaggeration, and Horrible Hopping Hindsight. Overbearing Know-it-all is:

"a dismal demon who was mostly mouth...ready at a moment's notice to offer misinformation on any subject. And while he tumbled heavily, it was never he who was hurt, but rather, the unfortunate person on whom he fell."

The only caution needed is to remind children that demons do exist, and the real ones aren't so funny.

While this is studied in Grade 5, and my youngest in Grade 2 is quite enjoying it, this is not a book I'd recommend for younger readers to tackle on their own. It is 60 years old, and some language – like "tollbooth" – is unusual today, in need of explanation to pre-teens. And there are puns galore, many of which only a kid who enjoys playing with language will spot on their own. But that shouldn't be a problem, because this is a book that mom or dad could enjoy too, as they read it aloud to all their young charges.

So, two enthusiastic thumbs up for any and all who are twelve and up.