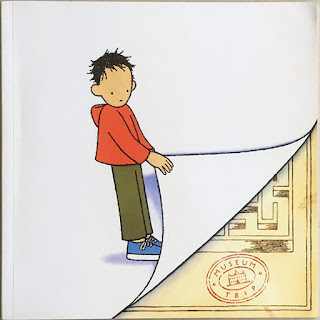 
In this wordless wonder, a little boy on a class trip to the museum stops to tie his shoe and loses track of the others. He then discovers a small door in the wall that leads to a room with 6 small mazes on display. Next thing, we see a little version of him running through each maze, one by one. Has he actually shrunk, or is this him daydreaming and just imagining he’s running through them? Either way, readers in Grade1 and preschool will enjoy working through each of these simple mazes. As the boy makes his way to the middle of the last maze we get a glimpse of him having a gold medal hung around his neck. Right afterward, he’s big again and manages to track down his class. So was his maze adventure just a daydream? Well, on the final panel, as the class leaves the museum, we see the boy discover he does have a gold medal around his neck...and we see the museum director has one around his neck too!

Kids who enjoy the mystery of this tale will enjoy the author’s Red (2004) and Red Again (2017) wordless stories which are more mysterious still. They should be bought as a set, with the ending of the one serving as an introduction to the next, and vice versa (or as my one daughter put it “They’re a circle!”).

More mysterious still is secret box (2011) in which generation after generation of children going to the same boarding school discover the same box, with a treasure map that allows them to meet up with the children who have discovered the map before. Some wordless books are too mysterious, such that it's hard to know what on earth is going on. This almost crosses the line, but Lehman's friendly, detailed drawing ensure this is still a fun one.

Less mysterious, but lots of fun, (and still wordless) is the author’s Trainstop (2008) where a girl goes on a train ride and encounters little people in need of a big friend. Another favorite is Rainstorm (2007) about a boy wandering his big house all alone who finds a key that unlocks a truck. The trunk opens into a very long tunnel under his house which leads to… well, you’ll have to get the book to find out!

Parents might think wordless books are good ones for their pre-reading or still-learning children to "read" on their own, but that's not so. These are books best experienced with a parent along for the ride, to help them learn the skills of deciphering story from visual clues. It's loads of fun for child and parent!