In the hall of the Dragon King 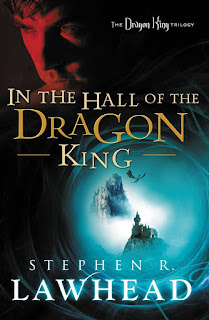 
This is an old-fashioned fantasy tale, with a loosely Christian underpinning. Quentin is a young man who has had a quest thrust upon him. He was going to spend his life behind the walls of a temple, so this turn of events isn’t unwelcome. But he has to figure out how he can see the queen. And someone needs to rescue the king. Oh, and there’s a dark wizard that needs to be dealt with. Is this really a job for a young former priest-to-be who doesn’t know one end of a sword from the other?

The young Quentin, looking for help, meets a hermit of sorts, who serves not the gods, but the one God. That’s an ongoing theme throughout, as author Stephen Lawhead is trying to point readers to the true God.

However, Lawhead sometimes gets it wrong. Quentin is told that God leads by “hunches and nudges” and “very rarely by direct command.” But our God does give us clear direct commands, in His Word, though some who profess to be Christians reject His Word in favor of hunches. Also, when a soldier is dying and asks how to go to heaven, the hermit tells him to just believe, but doesn’t mention anything about God being holy, the man being sin-stained, and the need to ask God for forgiveness.

While those are notable flaws, and worth bringing up with younger readers, they amount to only a few paragraphs in a rollicking adventure. There is a true and proper villain who had delved deep into the dark arts – he's a necromancer even! – which sharpens the contrast with the hermit, who has turned away from magic to serve his Lord.

One feature I really appreciated is that, while this is the first book of a trilogy, it is a full and complete story – this is not the sort of trilogy that is actually one story split over three books. But readers can look forward to Quentin's further adventures in The Warlords of Nin and The Sword and the Flame.

Like any great children's book, this will be a great read for adults too – I'd recommend it for 12 and up.