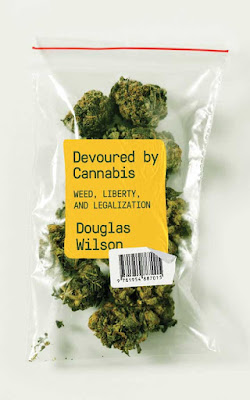 Why shouldn’t Christians smoke marijuana? The go-to answer to that question used to be: because it is illegal. But with its legalization in Canada and many US states, that argument is increasingly irrelevant.

But are there any other reasons not to inhale? In this slim volume, Douglas Wilson says yes, arguing that it is a sin, and despite what’s happening in jurisdictions all over, it is the sort of sin that should also be a crime.

So why is it a sin? Wilson points to God’s prohibition against intoxication. While alcohol can also cause intoxication, he notes the Bible also spells out five legitimate uses including:
It is this last one that is sometimes pointed to as a legitimate usage for marijuana, but in answer to that argument, Wilson notes that God’s condemnation of drunkenness and His call for self-control puts constraints on what sort of celebrations we should have. “True celebration is discipline, accompanied by hard work, training, and fruition of joy” while the use of marijuana “is a celebratory slide downward…”

His point is that alcohol goes well with a been-cooking-all-day-holiday-feast, with one wine pairing “well with the beef, and another chosen because it complements the pasta.” Meanwhile, “marijuana goes well with Oreos and mustard.” The one can be a part of a God-glorifying family gathering, the other simply a lead-in to letting loose. Thus “the only possible lawful use for marijuana is the medicinal, [but] the use to which everyone puts marijuana is the one that is denied to alcohol,” i.e. intoxication.

Should it be a crime?

Wilson also makes the argument that marijuana usage is not simply a sin, but a crime, and notes that’s a departure from the more hands-off stance he once leaned toward. Why the change? While acknowledging not all sins should be crimes – we wouldn’t want the government trying to police the 10th commandment – Wilson notes that in a finger-in-every-pot State such that we have, whatever isn’t criminalized is all too often then encouraged and tax-subsidized. And it isn’t hard to see how that would happen with marijuana usage. Our welfare state will have the government picking up the pieces, doling out tax dollars. That might be money for medical treatments dealing with increased cases of psychosis. Or it might be increased unemployment and welfare payouts that will be needed for the addicted.

Another cost will come to employers. The way legalization has proceeded, it as if it’s been some sort of neutral act, granting the pot-user a freedom at no cost to anyone else. If that were so, Wilson notes, then:

Government will be stuck with the cost, as will employers, who will not be allowed to fire someone for using what will now be a perfectly legal substance.

Wilson is not arguing so much that marijuana must always and in all circumstances be criminalized, but more that presented with a choice of the State either criminalizing usage or encouraging it, then we should choose the former. But are those really the only realistic options? Can’t the State take a neutral stance, neither against, but also not for? Well, that latest bit of evidence on that front is Washington State’s “Joint for Jabs” where the government is using the promise of a free joint to promote Covid vaccination. It really does seem that if they aren’t against it, then they will be pushing it.

So what then is to be done? Wilson is writing for the US, where some states have legalized it and others have not, and there he’s hoping it might still be possible, if not to maintain an outright “red,” to at least run with a “yellow” rather than a “green.” Where it is completely legal, like Canada, the hope would be that at least the Church can recognize what should be – that it is a sin, even if it isn’t a crime. Unconfused on that point, God’s people can minimize our own addictions, and, to help others, make a push for restrictions, particularly for teenage and young adult usage.

The book concludes with a Gospel appeal, in which Wilson reminds us that it is only when our country turns back to God that we will be able to turn away from such addictions. But he is quick to point out that while our addictions should have our country desperate for God, we don’t turn to Christ simply to right ourselves or our country.

“If we treat Christ as the means to an end (freedom from drugs, say), then we are not coming to Him as Christ. He is a Savior, not a self-help specialist. We come to the Giver for who He is and not for the gifts that He might give. At the same time, He is the Giver of gifts (Eph. 4:8).”

Our culture doesn’t just need to be freed from addiction – a sober pagan is still going to hell. What the Church can direct people to is not simply freedom from drugs, but freedom in Christ. In Him, we are free to enjoy our God and Maker, and we are free to live to His glory. That will also be a freedom from addiction, but that is the fruit that comes from turning to God. What Wilson is reminding us of here is the need to point others to the Tree of Life, and not simply its fruit.

The value of Wilson’s book is, first and foremost, the section on whether marijuana usage should be a sin. The clarity on offer here could be a great help for our teens and young adults when (not if) they are pressured into trying it. For parents who think that won’t happen, just remember back to the parties you either attended or heard about where all the attendees were church-goers, but where underage drinking was prevalent nonetheless. So let’s not be naive about whether our children are going to be offered marijuana at their own parties today. Dad, mom, Wilson’s book is a quick, insightful discussion that would make for a great read for you to tackle along with your teen – it’s a tool here for you to use.
Posted by Jon Dykstra at 12:30 AM