"Live not by lies" in 7 quotes 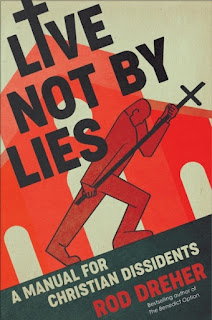 In Live not by lies, Rod Dreher shares the warning he’s hearing from former emigrants from the Soviet Union and other Iron Curtain countries. They lived through totalitarianism and fled from it, and they told Dreher they are seeing signs of a “soft” totalitarianism now showing up in the West. This soft sort is less about the State imposing its will, though, conversion therapy bans, and requiring a hospice to provide euthanasia, shows that is happening too. But the soft totalitarianism is more about a culture that will cancel Parler, block Focus on the Family, and keep conservative speakers off university campuses. This soft sort also evidences itself when people, out in public, start feeling the need to whisper their opinions, afraid others will hear that they still think boys can’t be girls, abortion is murder, homosexuality a sin, and Donald Trump was actually the lesser of two evils.

Dreher wants Christians to hear these former Soviets’ warnings so we can be prepared for what they think is coming. What does being prepared mean? Dreher’s particular focus is to have us ready to face persecution.

To give you a feel for Dreher’s argument, and a flavor of his writing, here are seven quotes from Live not by lies.

Silence can be a stand

“‘Our way must be: Never knowingly support lies!’ You may not have the strength to stand up in public and say what you really believe, but you can at least refuse to affirm what you do not believe….If we must live under the dictatorship of lies, [Solzhenitsyn] said, then our response must be: ‘Let their rule hold not through me!’”

Government that cares for you cradle to grave

Free to say all that Google and Twitter will allow

"Today’s totalitarianism demands allegiance to a set of progressive beliefs, many of which are incompatible with logic – and certainly with Christianity. Compliance is forced less by the state than by elites who form public opinion, and by private corporations that, thanks to technology, control our lives far more than we would like to admit."

Don’t bat for the other team

“What did it mean to live by lies? It meant, Solzhenitsyn writes, accepting without protest all the falsehoods and propaganda that the state compelled its citizens to affirm – or at least not to oppose – to get along peaceably under totalitarianism. Everybody says that they have no choice but to conform, says Solzhenitsyn, and to accept powerlessness. But that is the lie that gives all the other lies their malign force. The ordinary man may not be able to overturn the kingdom of lies, but he can at least say that he is not going to be its loyal subject.”

Demanding you call him “her”

“According to Hannah Arendt, the foremost scholar of totalitarianism, a totalitarian society is one in which an ideology seeks to displace all prior traditions and institutions, with the goal of bringing all aspects of society under control of that ideology. A totalitarian state is one that aspires to nothing less than defining and controlling reality. Truth is whatever the rulers decide it is.”

Judged by our group, not our character

“In classic Marxism, the bourgeoisie are the oppressor and the proletariat are the oppressed. In the [today’s] cult of social justice, the oppressors are generally white, male, heterosexual, and Christian. The oppressed are racial minorities, women, sexual minorities and religious minorities. (Curiously, the poor are relatively low on the hierarchy of oppression. For example, a white Pentecostal man living on disability in a trailer park is an oppressor; a black lesbian Ivy League professor is oppressed.)”

Christians as the enemy, not as allies

“Consider that the civil rights movement of the 1960’s was led by black preachers who articulated the plight of their people in biblical language and stories. Those days are over, and we will not be able to take the measure of the long struggle ahead if we don’t understand the essential nature of the opposition. It regards Christians as the most significant remaining obstacle, bearers of the cruel and outdated beliefs that keep the people from being free and happy.”