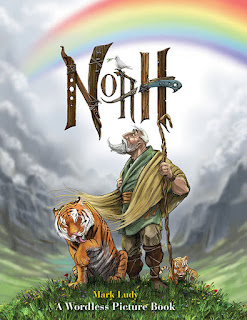 Mark Ludy's wordless account of Noah's life will fascinate young and old. There's so much to see on every page, and the wordless nature of it invites parent and child to discuss all that's going on.

The danger with such an account is that for some it might come to replace the original biblical version. As children pore over this picture book's pages repeatedly, they could easily forget that even as it is reasonable to believe Noah might have made use of the strength of a dinosaur or two, the Bible doesn't actually say he did.

But what such a book can also do is help us re-evaluate some other non-biblical assumptions we might have inadvertently adopted.

Noah's wife is shown here as a lighter colored black, while Noah himself is maybe Grecian, Roman, or perhaps Sicilian. What both most certainly are not – and what they most probably were not – is a British or Scandanavian sort of white. That might bring questions for the many a child and adult who, having grown up with picture Bibles that have a white Adam and Eve, and a white Jesus too, have presumed Noah was white as well. But it is more likely that Adam, Eve, and maybe many of the generations that followed had some sort of middle brown skin, as that genetic coding can contain within it the possibility of both darker and lighter skin in the generations that follow.

Another corrective: while evolutionary theory portrays Man as being much simpler back in history, the Bible details some big advances being made from one generation to the next (Genesis 4:20-22). They were no primitive dummies so it is helpful to see Noah shown as living in a fairly advanced level of industry and technology. They aren't in a rocket age, but they also aren't living in caves either.
Finally, we also get a good idea of the sheer magnitude of the Ark, correcting the silly bathtub toy picture some might have stuck in their heads.

This is not a book that we shouldn't ever let overshadow the biblical account, but when we put it in its proper place – like that of a commentary that helps us reflect on what Genesis 6-9 is actually saying – then it can be a wonderful aid.

I will offer a couple of critiques: while there's a dinosaur and some mammoths to be seen working on the ark's construction, neither can be found in it. Also, while animals two by two can be seen making their way to the ark, there don't seem to be any groups of 7 (Genesis 7:2). Of course, we don't see every animal arrive, so maybe we just missed those, and they'll be found in any expanded future edition of the book.

So who is this for? We probably all think of picture books as being for children, but I really think everyone will love it, from ages 3 on up to 103!

You can take an extended peek here.
Posted by Jon Dykstra at 5:07 AM