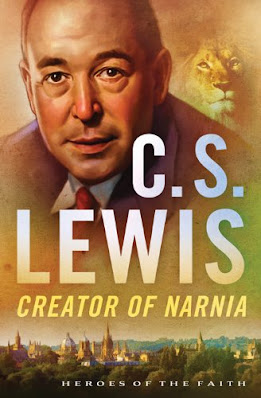 This biography of C. S. Lewis is part of the Heroes of the Faith series, which engage readers in the highlights of the lives of significant leaders in Christian history. Given the title of the series, you could predict that this book would not be an in-depth look at the strengths and weaknesses of C. S. Lewis's ideas, but I was pleasantly surprised to see how well the author caught the personal foibles and motivations of the title character.

Although (strangely) the cover and spine of my edition did not even give the name of the author of the biography, Sam Wellman skillfully shows how Jack (Lewis's nickname since childhood) went from a nominally Christian upbringing through a full-fledged embrace of atheism to being Surprised by Joy (his young self's hint at the reality of transcendence). Along the way, Wellman gives us glimpses of the sources, experiences, and inspirations behind Jack's writing, starting with his pre-Christian poetry, and progressing to his defense of and understanding of his Christian faith.

Wellman also shows us how Lewis was associated with other Christian writers, both influenced by and influencing them, including the famous Inklings. He portrays Jack's personal relationships with his father, with Mrs. Moore (the mother of a fellow soldier killed in World War I); with Jack's brother Warnie; and with Joy Gresham, the woman he eventually married. Wellman makes clear how Jack was an honorable man whose Christian faith enabled him to ignore personal attacks by unfair critics, but also demonstrates that Jack had to struggle with sinful weaknesses like the rest of us.

Anything missing from the book? As I mentioned above, Wellman does not critique his subject's ideas, and once or twice, in focusing on the critical and popular reactions to Lewis's book, gives some books less appreciation than I felt that they deserved. However, Wellman does often clarify the goals of Lewis's writing through thoughtful discussion of brief excerpts.

Wellman's biography will provide the younger or inexperienced reader of Lewis's writing with an overview of why and what he wrote, and may well encourage readers to check out more of his work.
If you would like to learn about how C. S. Lewis became the creator of Narnia (and Boxen, and much else), you can find this book here, and here in Canada. (There is also a shorter biography of Lewis by the same author entitled C. S. Lewis: A Lion for Truth, which I have not read, but which may be suitable for younger readers.)
Posted by Jeff Dykstra at 4:00 AM