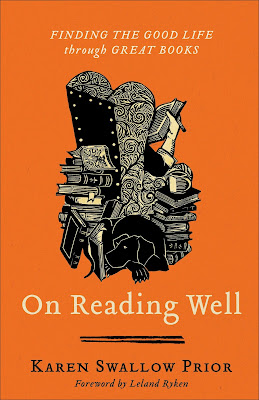 This is a really good read for English teachers (like me), for sure, but it's also a really good read for anyone who has read any of the books Karen Swallow Prior discusses and still wonders what the point was. Prior starts by defining what she means in the subtitle by the good life - and it's not the easy life, the fulfilling life, or the prosperous life. Instead, she discusses the power of the word good in a way similar to how God describes His creative work in Genesis 1 - doing the right thing, echoing in our lives the beautiful order that God Himself gave to the world He made (and still upholds).

Prior insists that the purpose of great works of literature is to point us toward virtue, to warn us away from vice, to demonstrate the path of the golden mean between extremes. Literature cultivates virtue both in the examples it provides and in the type of reading it demands.

Prior categorizes three types of virtues: the cardinal virtues extolled in the ancient world (prudence, temperance, justice, and courage); the theological virtues that can only be developed by the work of the Spirit (faith, hope, and love); and the heavenly virtues that contrast several of the seven deadly sins (chastity, diligence, patience, kindness, and humility).

Let me just highlight some chapters each section to show you the depth of insight Prior offers. Her analysis of A Tale of Two Cities highlights how both London and Paris demonstrate the lack of justice that often governs human affairs, as well as the need for something that satisfies our sense of justice even when it is not fair - the Christlike sacrifice of one of the major characters. Her discussion of The Road domonstrates how hope functions in a piece of post-apocalyptic fiction that is even bleaker than the dystopian fiction that dominates the reading preferences of many young adults. What she says about Ethan Frome makes me wish I had read the novel already, in her discussion of how chastity both nourishes community and requires it. Her enthusiasm for George Saunder's short story "Tenth of December" also introduced me to a new author in a look at the virtue of kindness.

her look at these works is equally illuminating.

A couple cautions: Prior, though herself a Baptist, seems to be writing from a very broadly Christian perspective. Reformed readers might find her frequent references to both classical authors and Catholic thinkers like Thomas Aquinas somewhat problematic. I was not personally convinced by her outlook on Silence, a novel about the 'hidden faith' of an apostate Catholic priest - an analysis that seemed to suggest that faith could be felt deeply even when not showing outwardly.

If you think that Karen Swallow Prior can help you find the good life through great books, you can get it here, or here in Canada.
Posted by Jeff Dykstra at 4:00 AM