Do I Know God? 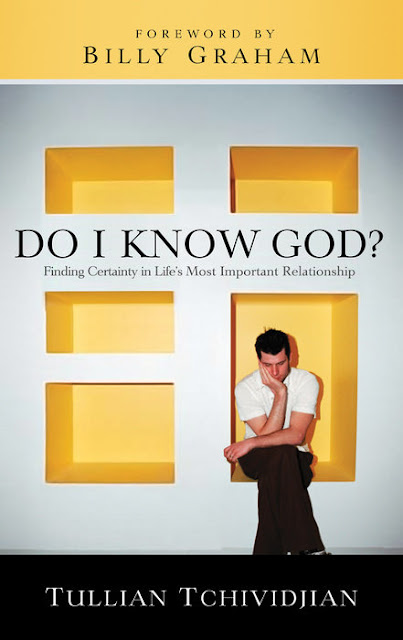 
Billy Graham is the only explicitly Arminian preacher I know of, and he wrote the Foreword to this book, but his grandson Tullian Tchividjian attended Reformed Theological Seminary. From that Reformed perspective, he deals with the issue that vexed many Puritans (another brilliant part of our Reformed heritage), as well as many Christians today - Do I Know God?

Tchividjian has a deep personal connection with the topic, as a returned prodigal, and as a minister who deals not only with people who lack assurance of their salvation, but with those who have a false assurance - hypocrites. He starts by exploring what he learned in his young adulthood - that knowing God means having a real relationship with Him. He describes the danger of various kinds of false assurance of salvation: merely praying the "sinner's prayer," making a "decision for Christ," being "religious," and being "spiritual." While all of these may demonstrate some level of understanding of God, none are sufficient to establish the certainty of a real relationship with Him. Neither is being a "good person" or claiming faith without responding in grateful obedient love.

Instead, Tchividjian stresses the importance of believing God's promises, particularly of fellowship with Him in Christ. That fellowship leads to both assurance of the truth of right doctrine about Him as found in His word and a joyful communion with Him. Both our belief in God's truth and our communion with Him then bear fruit in an obedience that makes "our calling and election sure." Obedience is not the ground of our salvation, but it is the fruit of it.

Tchividjian makes a useful distinction between our relationship with God, which is grounded in Christ, and our fellowship with God, which can be disrupted by sin. Either that sin, or God's care for us, can drive us straight through "the dark night of the soul" toward a deeper dependence on Him. Finally, Tchividjian urges us to hold on to our relationship and fellowship with God in Christ in the hope grounded in the knowledge from God's word that "the best is yet to come."

In addition to the insight revealed in the eleven chapters of the book, the study guide leads the reader through thoughtful, challenging questions and Scripture references that make the book ideal for either personal or group study.

Sadly, one strong caution: Tchividjian's own conduct has undermined the power of his insights. If he truly has a relationship with God, his fellowship with God must be very troubled, since he has been implicated in extramarital affairs in two of the churches he has pastored. While, clearly, all men sin, including sexual sin in our hearts, the leaders of God's people are called to a higher standard of purity.

If you, or someone you know, struggles with whether you truly know God, and you can separate the writings from the writer, you can get Do I Know God here and here in Canada.