Two Ways to Get Out There 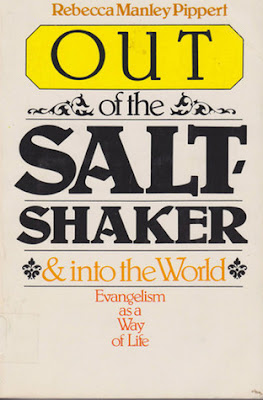 Out of the Saltshaker and into the World:
Evangelism as a Way of Life
by Rebecca Manley Pippert - 188 pages / 1979

Between Heaven and Hell:
A Dialog Somewhere Beyond Death
with John F. Kennedy, C.S. Lewis and Aldous Huxley
by Peter Kreeft - 115 pages / 1982

If there is anything Reformed churches and Reformed believers (including myself) need to work on, it's evangelism. These two books are really good reads on ways to reach out to non-Christians.

Rebecca Pippert's Out of the Saltshaker shows us how to not just proclaim the truth, but to demonstrate the truth of the gospel in our relationships. As the One who Himself is the truth, Christ showed both the truth of God's love in His healing ministry and the truth of God's justice in His teaching. Both of these, Pippert shows, are necessary in our engagement with a rebellious, but also sorely troubled, world. She shows how we must start by first knowing Jesus as the Good News and also as Lord. Three chapters deal with how Christ's message was radically different from the preoccupations of the Pharisees, and how we need to understand both the darkness of our own hearts and the grace of God to really have good news to proclaim. She then shows how our relationship with Christ deepens our love for others, and gives us practical ways, in that love, to talk with others about our faith. Her conclusion stresses that the greatest witness to the reality of Christ is (though she does not use the term) the communion of saints.

Pippert spends only a short chapter on apologetics, but that is Peter Kreeft's focus in Between Heaven and Hell. He uses a fictional encounter just after death of C.S. Lewis with two men who (in real history) died on the same day - John F. Kennedy and Aldous Huxley. Kreeft uses Kennedy as the exemplar of "modernistic or humanistic Christianity" and Huxley as the representative of "Orientalized or mystic Christianity." Strictly speaking, neither is Christian at all, but both are our world's of responding to (and minimizing) orthodox Christianity. Kreeft has Lewis respond to Kennedy by defending the divinity and resurrection of Christ, and to Huxley by demonstrating the orthodox understanding of what it means that Christ is divine. Kreeft's book is a superbly dramatized summary of much of C.S. Lewis defense of both the truth and the meaning of the gospel account of Christ's divine mission.

These two books together give great guidance in both why and how to show Christ's divine love and truth to the non-Christians in our lives. 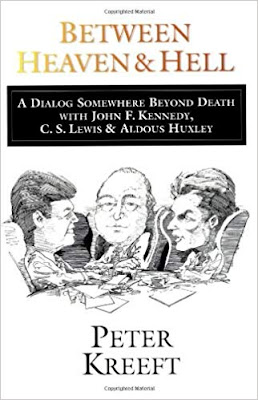 Still intrigued (despite the cautions above)? Use the following links if you think that Pippert can help you get out of the salt-shaker, or that Kreeft can help you present the choice between heaven and hell. Canadians can find Pippert's book here and Kreeft's book here.