Shooting at the Stars: The Christmas Truce of 1914 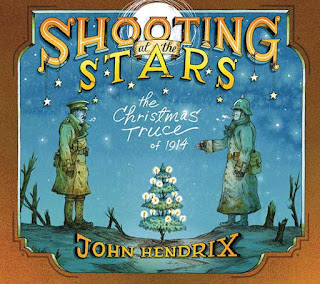 I was raised with stories of the Dutch Resistance and the Canadian liberators fighting against the brutal Nazis – war, it seemed, had clear villains and obvious heroes. Later, though, I learned that right and wrong in war can be far more confusing: for example, in recent years we’ve seen US-backed groups fighting other US-backed groups in Syria.

John Hendrix’s Shooting at the Stars: The Christmas Truce of 1914 presents parents with a tool to give our children a more nuanced understanding of war.

In a style that is halfway between realistic and cartoon, the author tells us the events of Dec. 24 and 25, 1914. On the day of Christmas Eve, 1914, all along the frontlines, the shooting slowed, and that night the Germans could be heard singing Stille Nacht, Heilige Nacht– “Silent Night, Holy Night.” Then the next morning, on Christmas Day, in spots up and down the frontlines, German, British, and French troops spontaneously came out of their trenches and celebrated Christmas together.


Then the next day they resumed trying to kill one another.

Does that make this book sound anti-war? I’d say it is more an underscoring of just how horrible war is. Fighting is sometimes necessary, which is why we are grateful for the courage of the Dutch Resistance and the Allied forces in World War II, who understood that stopping the Nazis was worth risking, and even giving, their lives. We need to remember their sacrifice because it was noble, and selfless, and good.

But if war gives us examples to admire and imitate, there is also much that is foolish, and which we should learn to avoid. To give our children a more complete understanding of war, we need to show them that there are those who, under the guise of patriotism, rush to war, even though war should always be a last resort. There are leaders who do not treat their young men’s lives as precious, and World War One is an example of that right up to the last day when 11,000 soldiers died in fighting that occurred after the peace treaty was signed. Commanders who sent their men out on offensives on that last day – some from our side – should be remembered as murderers.

Shooting at the Stars is a gentle way of teaching the ethical complexities of war. It is gentle in that no blood or gore is seen (making this suitable for maybe Grade Three and up). The most war-like illustration occurs on a two-page spread where we see three corpses, as soldiers on both sides work together to bury their dead. What is striking is simply that there were men on both sides who could praise God together one day and fight to the death the next. That is a shocking bit of history. And it needs to be remembered. 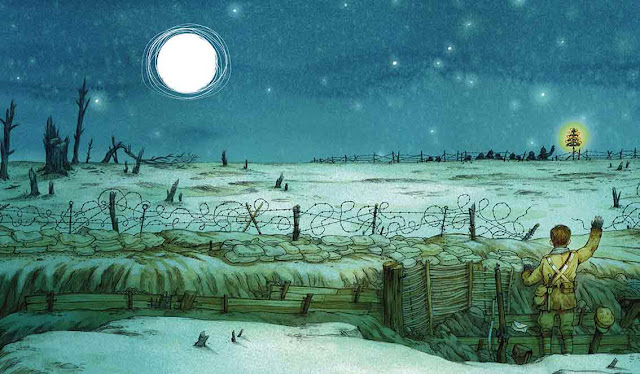